This is an AAR for last Sunday's Worthing Club game. It is set in the western Ukraine on 26th June 1941, the fifth day of "Barbarossa". It is in territory that was Polish up to start of WW2 in 1939, became Russian and is now Ukrainian. The main significance of this for us is that depending upon the source of information, the same place may have different names or different spellings of the same name. For the people living there at the time it was very bad news indeed.
The battle is known variously as Brody, Dubno or Brody-Dubno and is held by some to be the largest tank battle of WW2. It was fought in and around a triangle bounded by the cities of Brody, Dubno and Lutsk and lasted from 23rd to 30th June. Our part of the battle was the confrontation between 11th Panzer Division and the Soviet 43rd Tank Division north-east of Dubno. 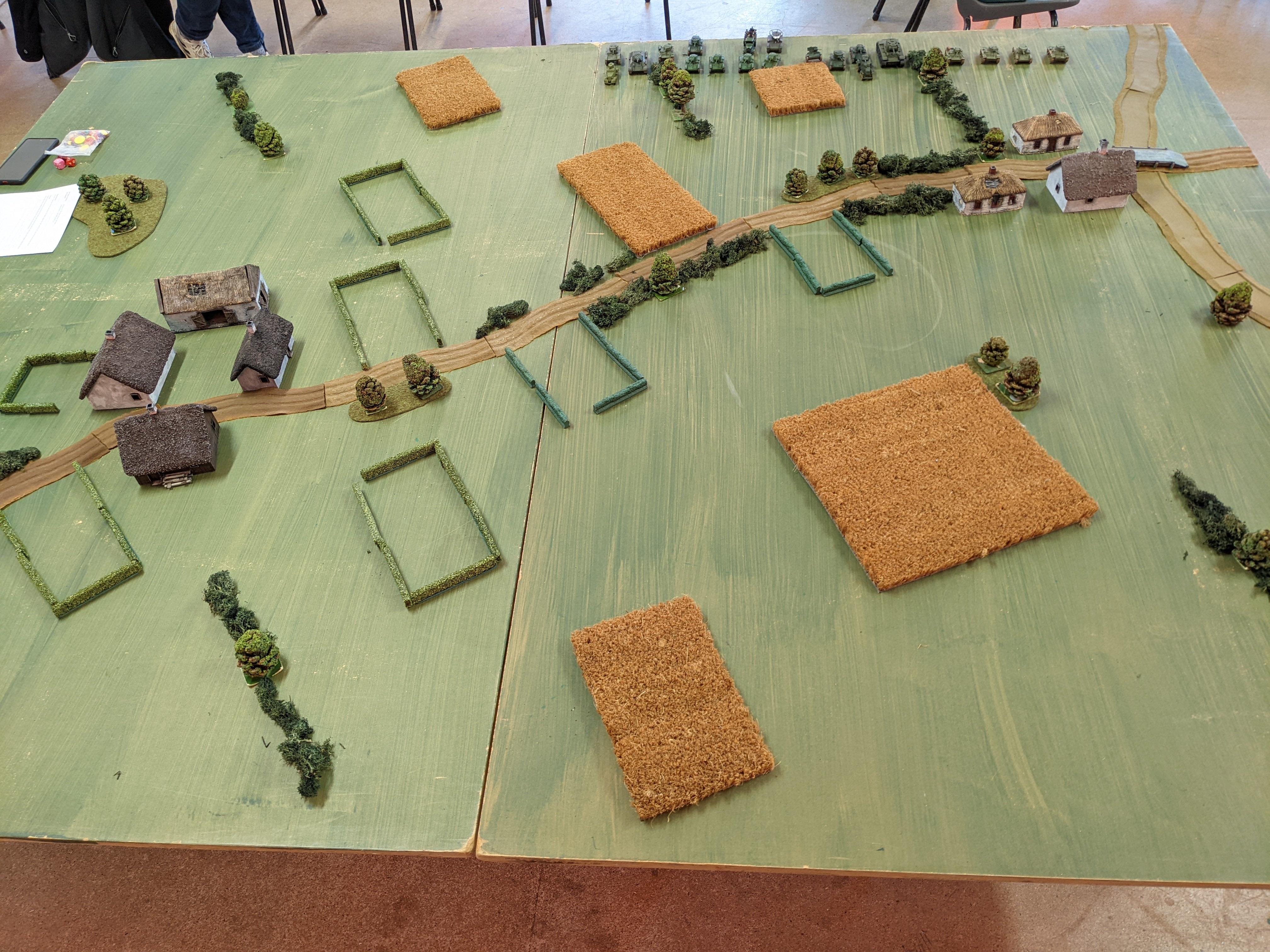 This is the table looking north with the village of Molodava lower left and Varkovychi upper right.
Dubno is something over 10k south-west of Molodava. There is no frontline as such and the previous day Ludwig Crüwell CO 11th Panzer ordered one of his two kampfgruppen consisting of 111th Schutzen regiment and recce elements to push on into the apparently open space to the east. Kampfgruppe Angern (CO of 111th Schutzen) did so crossing the River Stubla over the bridge at Varkovychi. Late that evening Crüwell received a message that Soviets had seized Molodava and were between the two parts of his division. 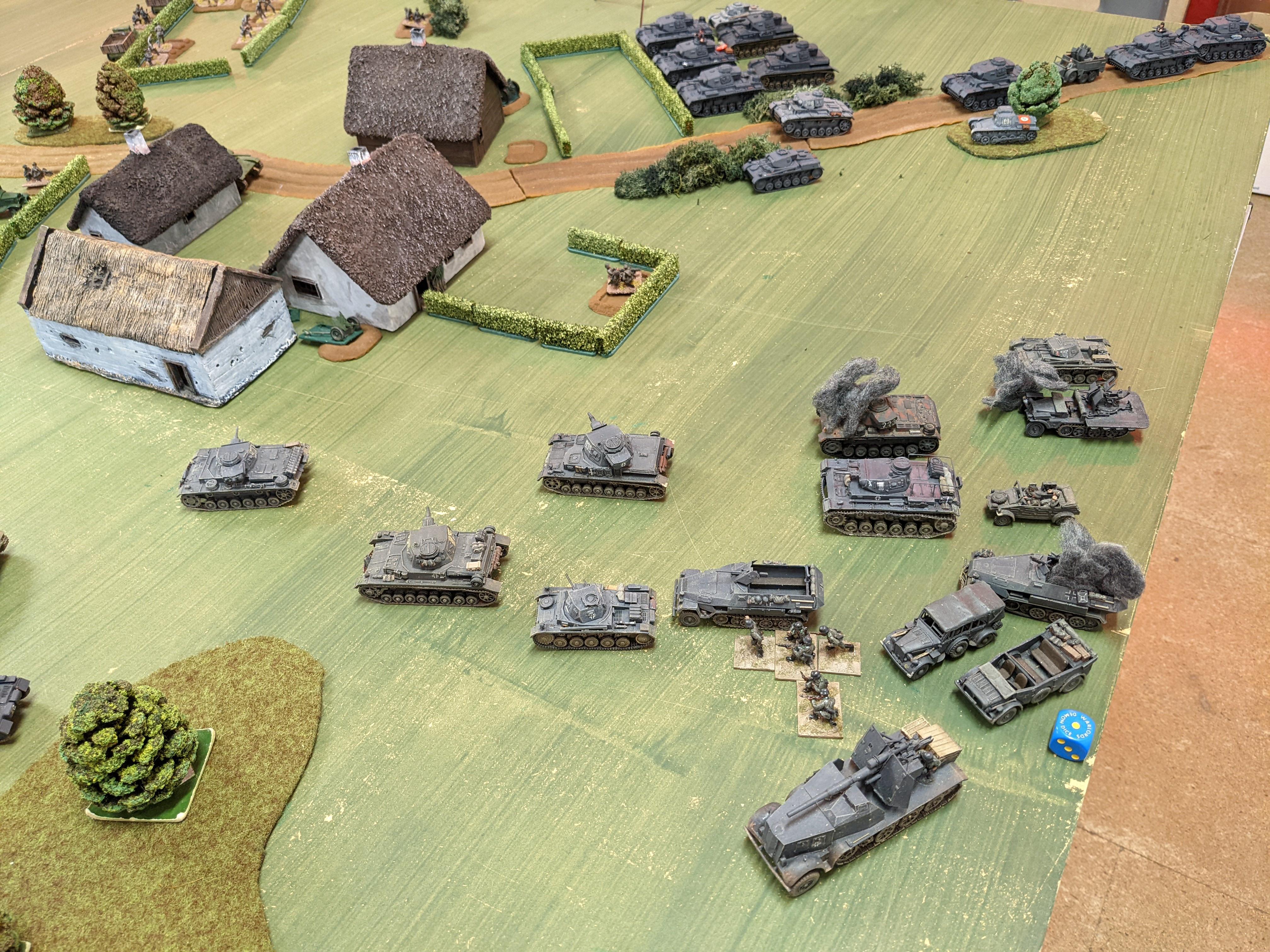 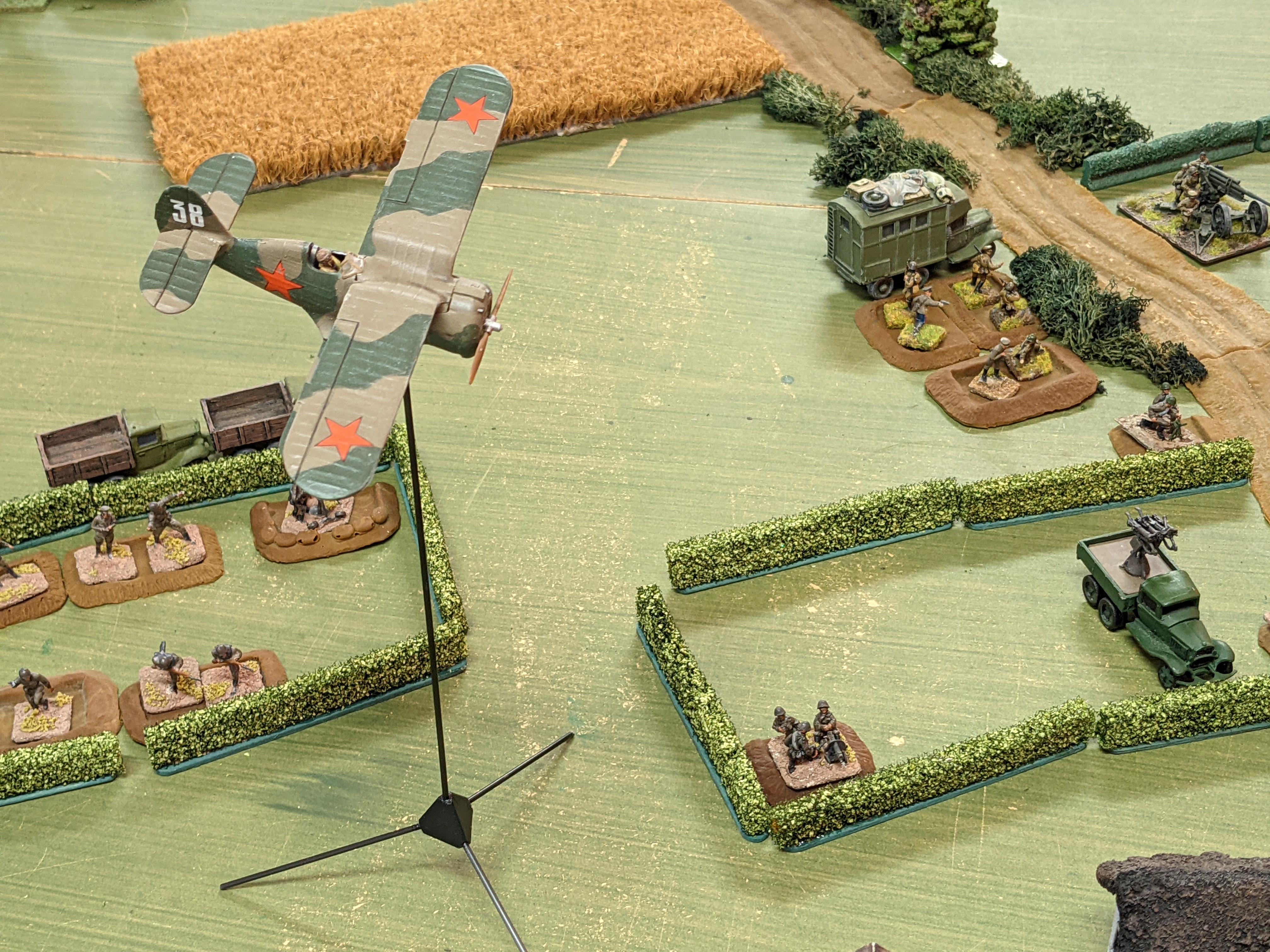 On 26th June the Panzers advance! The Germans planned to use their all arms kampfgruppe to destroy any Soviet counter-attacks from the flanks but the speed of the Soviet reaction surprised them. Col. I.G.Tsibin CO of the 43rd Tank Division, advancing from the north-east, had ordered his own motorised infantry regiment (two battalions) to seize Molodava before the Germans. The latter got a hot reception taking early losses from both AT fire and air attack (rocket firing I-153). 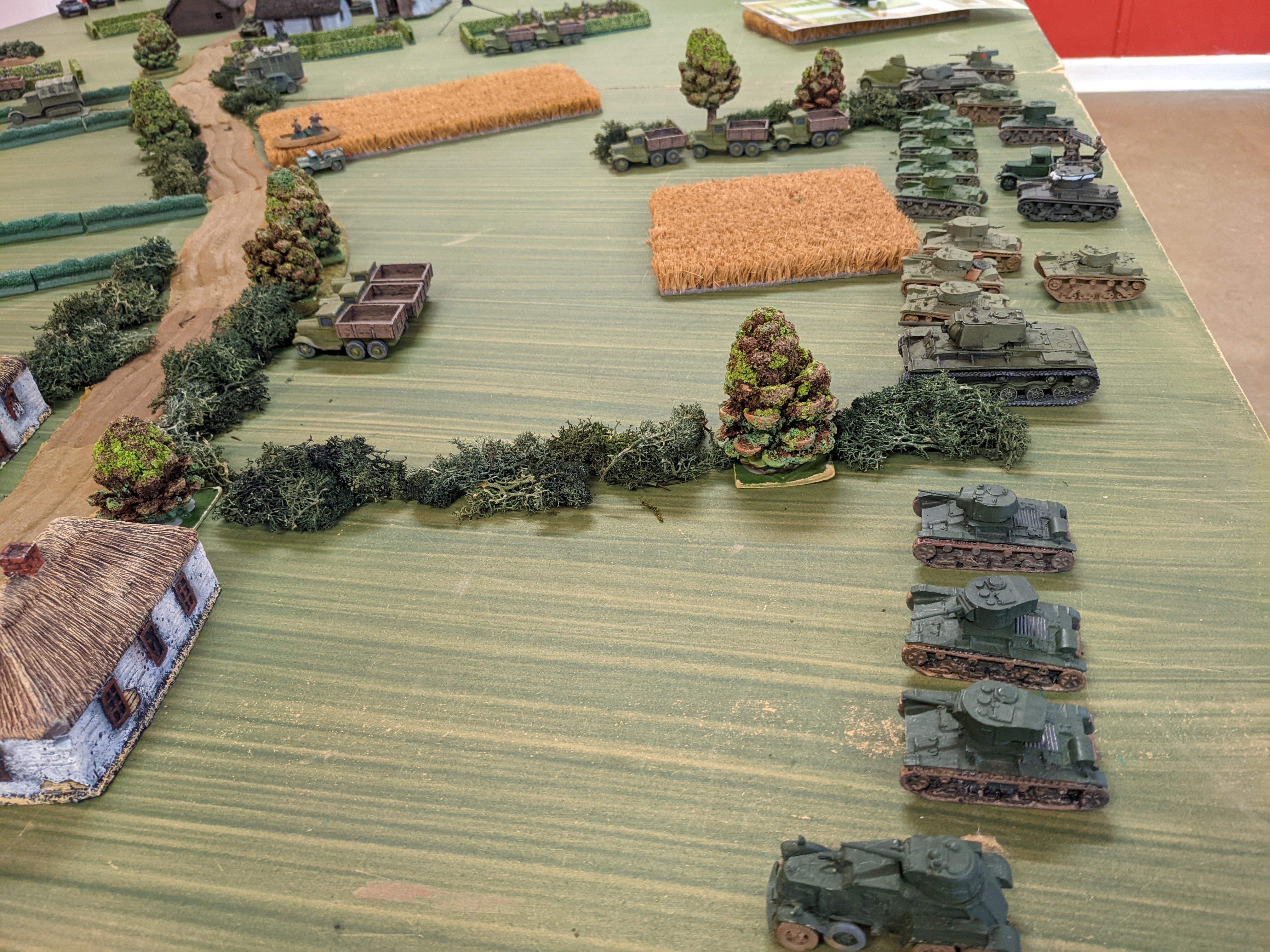 North of Varkovychi the 85th and 86th Tank Regiments advance to engage the Germans. 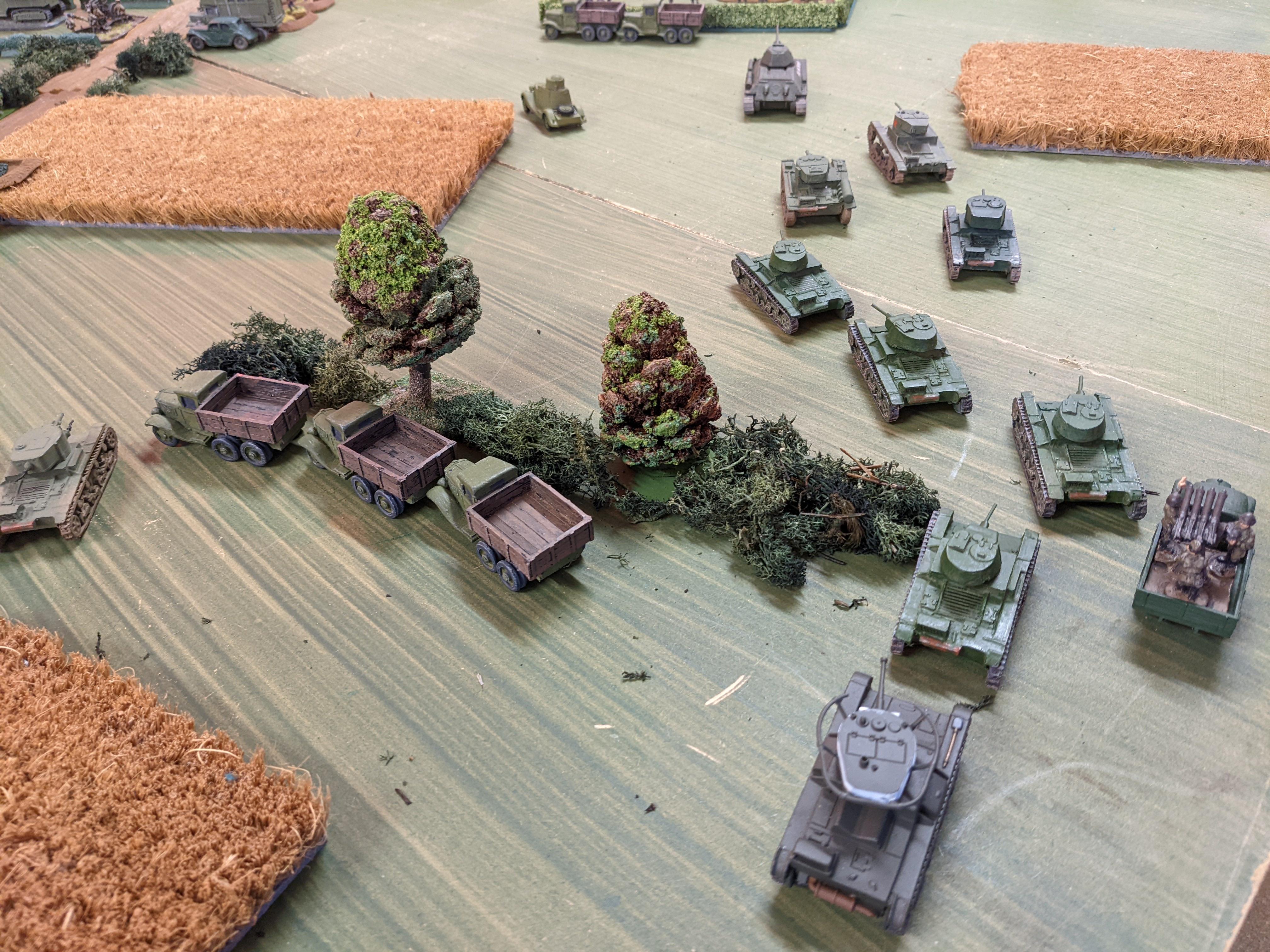 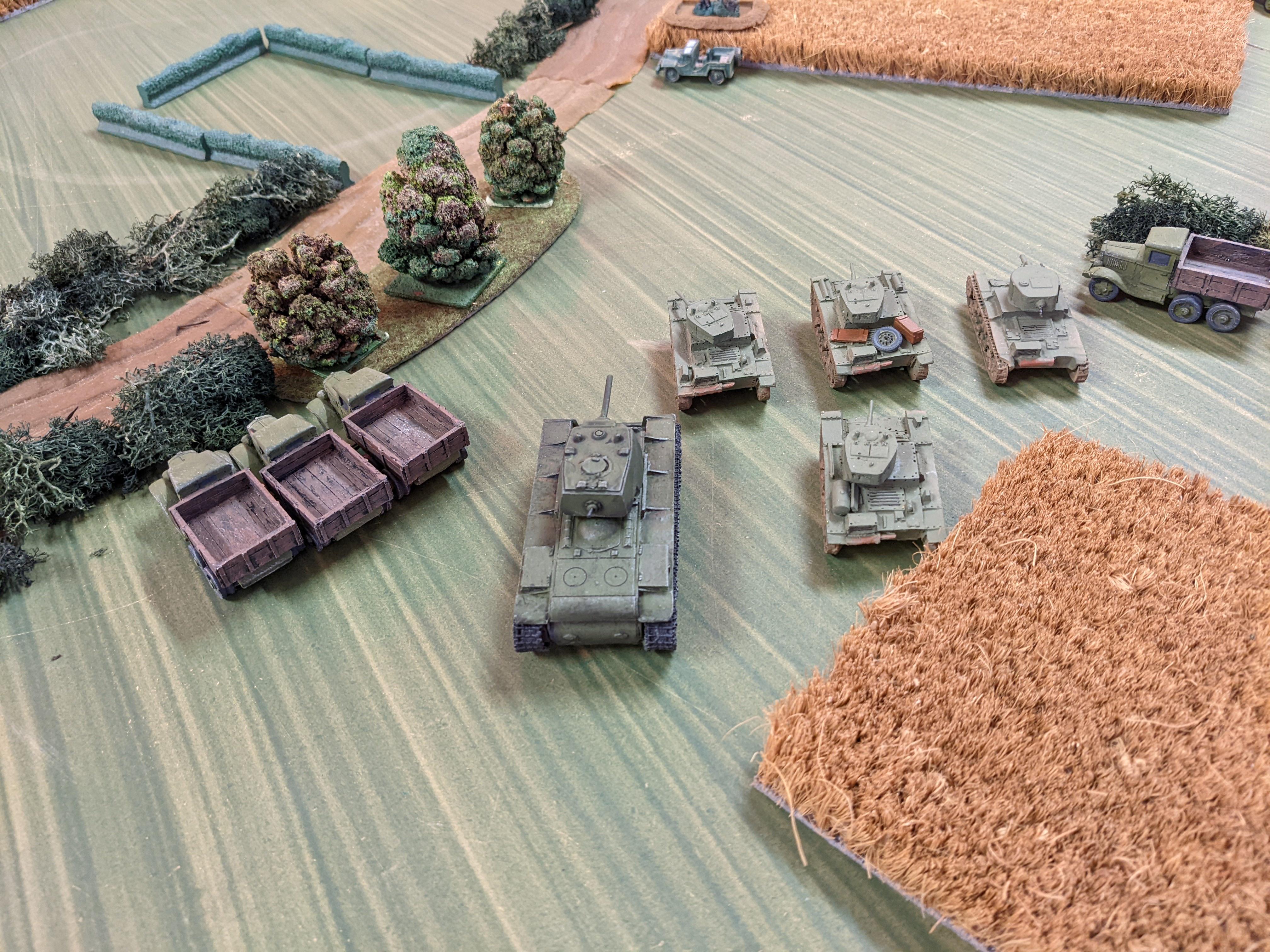 They advance rapidly led respectively by their medium and heavy tank battalions (43rd Tank had a small number of KVIs and T34s and 75 T26s.) The parked trucks are the transport for the 43rd Motorised Infantry regiment and have been sent to the rear. 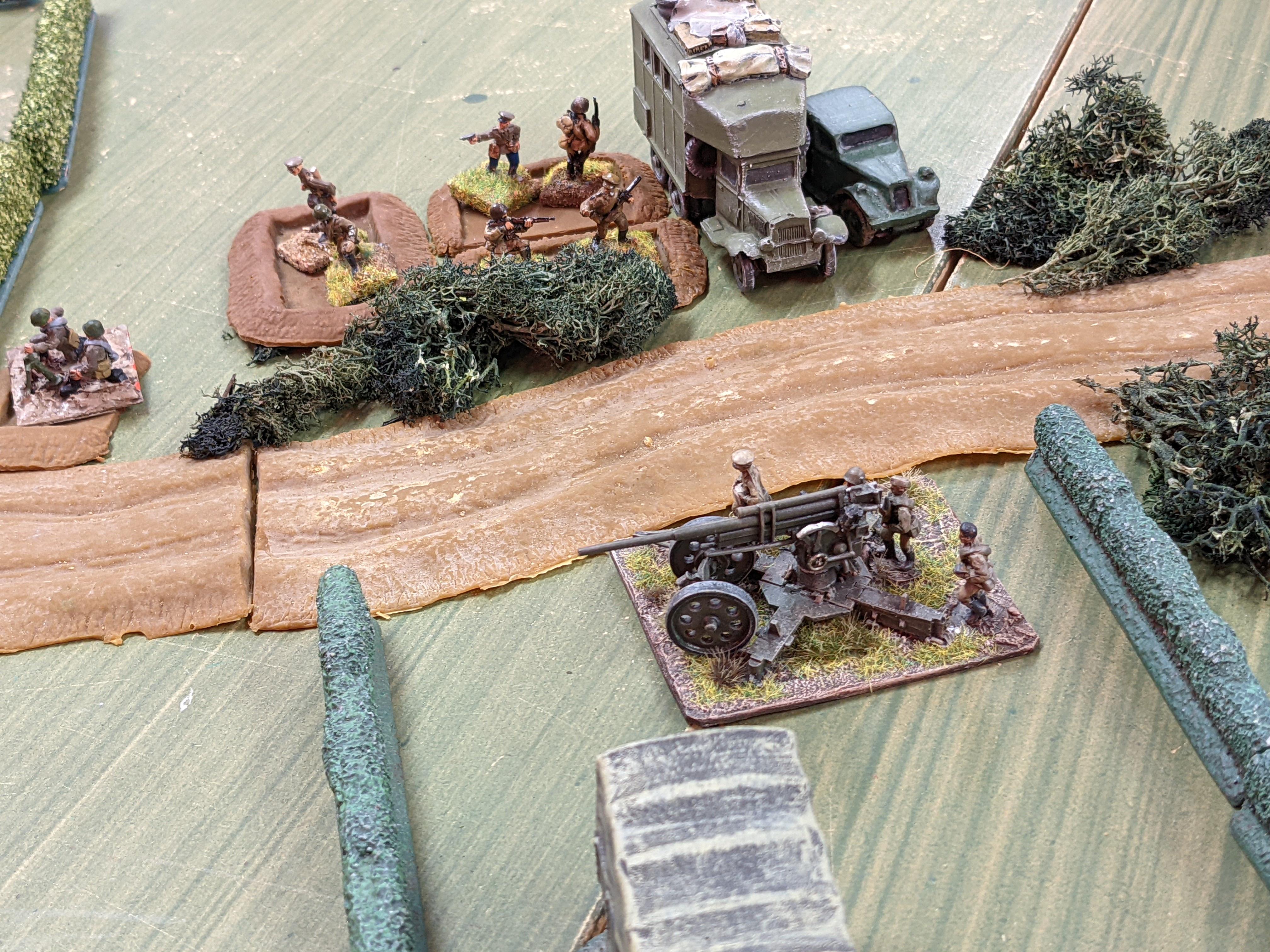 A 76.2mm Air Defence Gun Mod.38 covers the Soviet HQ against air attack and any enemy armour that approaches. 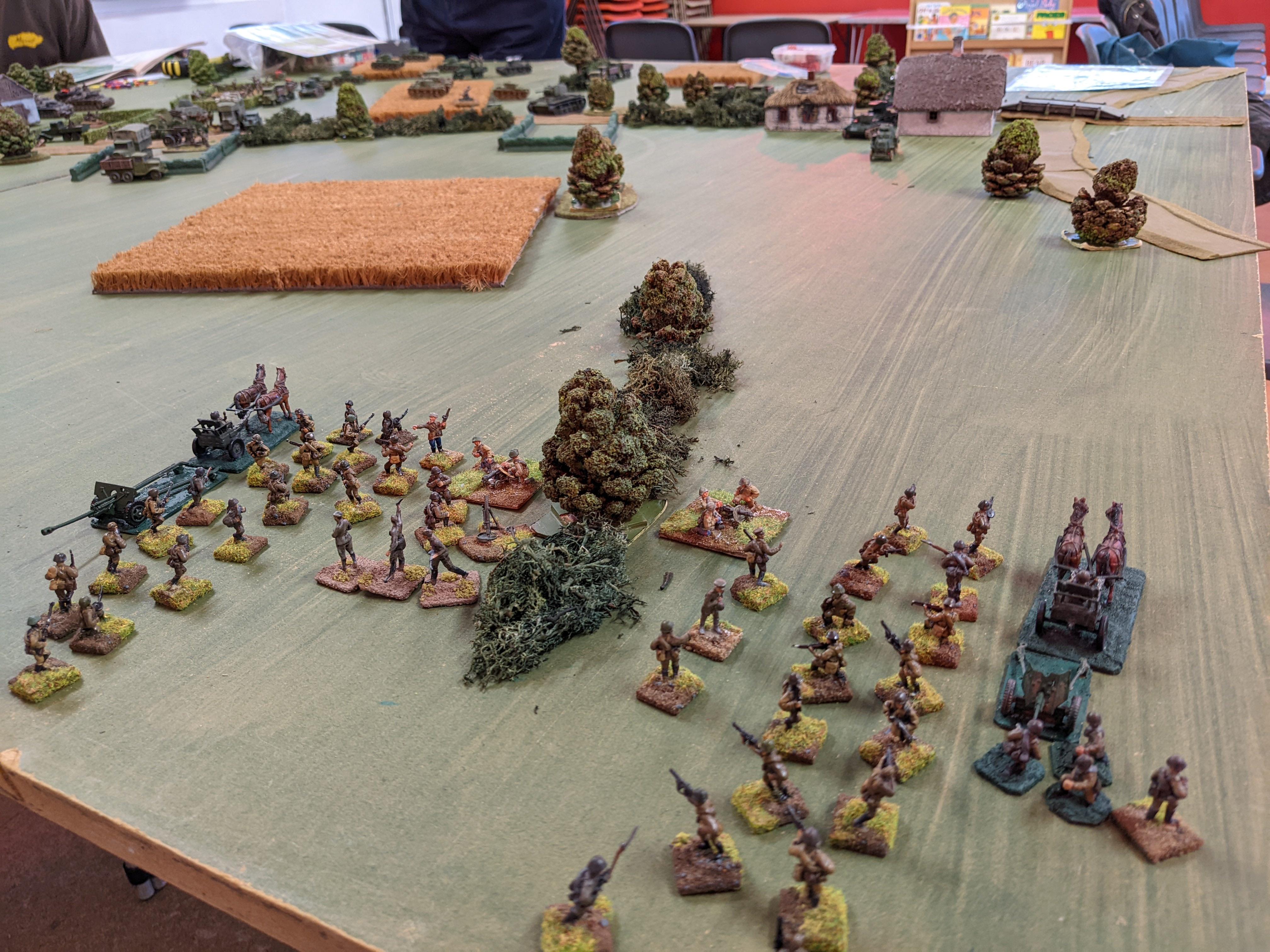 in the south-east corner of the table battered elements of the Soviet 228th Rifle Division move north towards the river crossing at Varkovychi, having become separated by the German attacks, they are hoping to rejoin the rest of the division which they believe is somewhere to the north-east. As in real life Tsibin will attempt to take these troops under command. 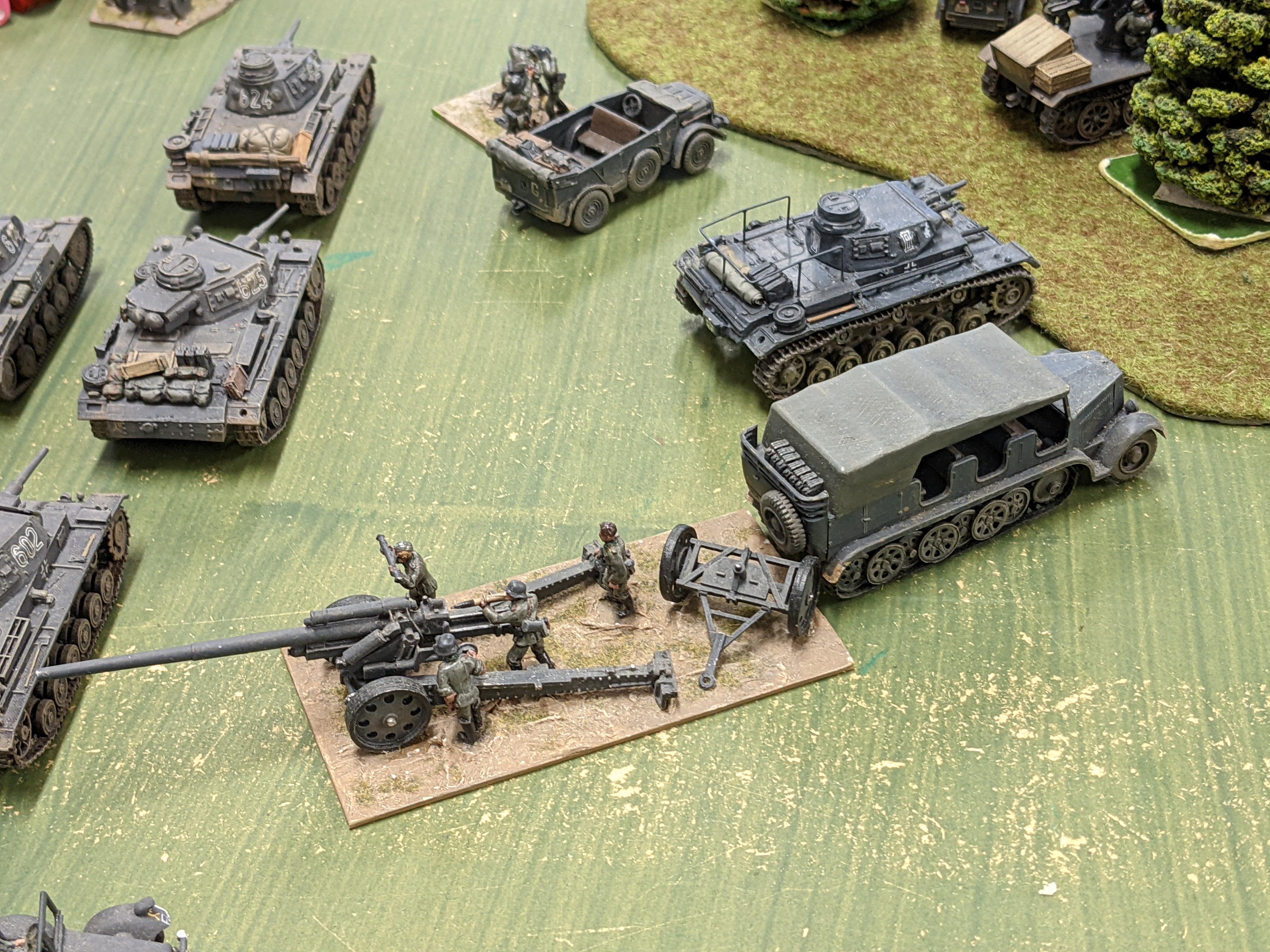 The Germans have not been idle bringing up their support weapons; the 10cm sK18 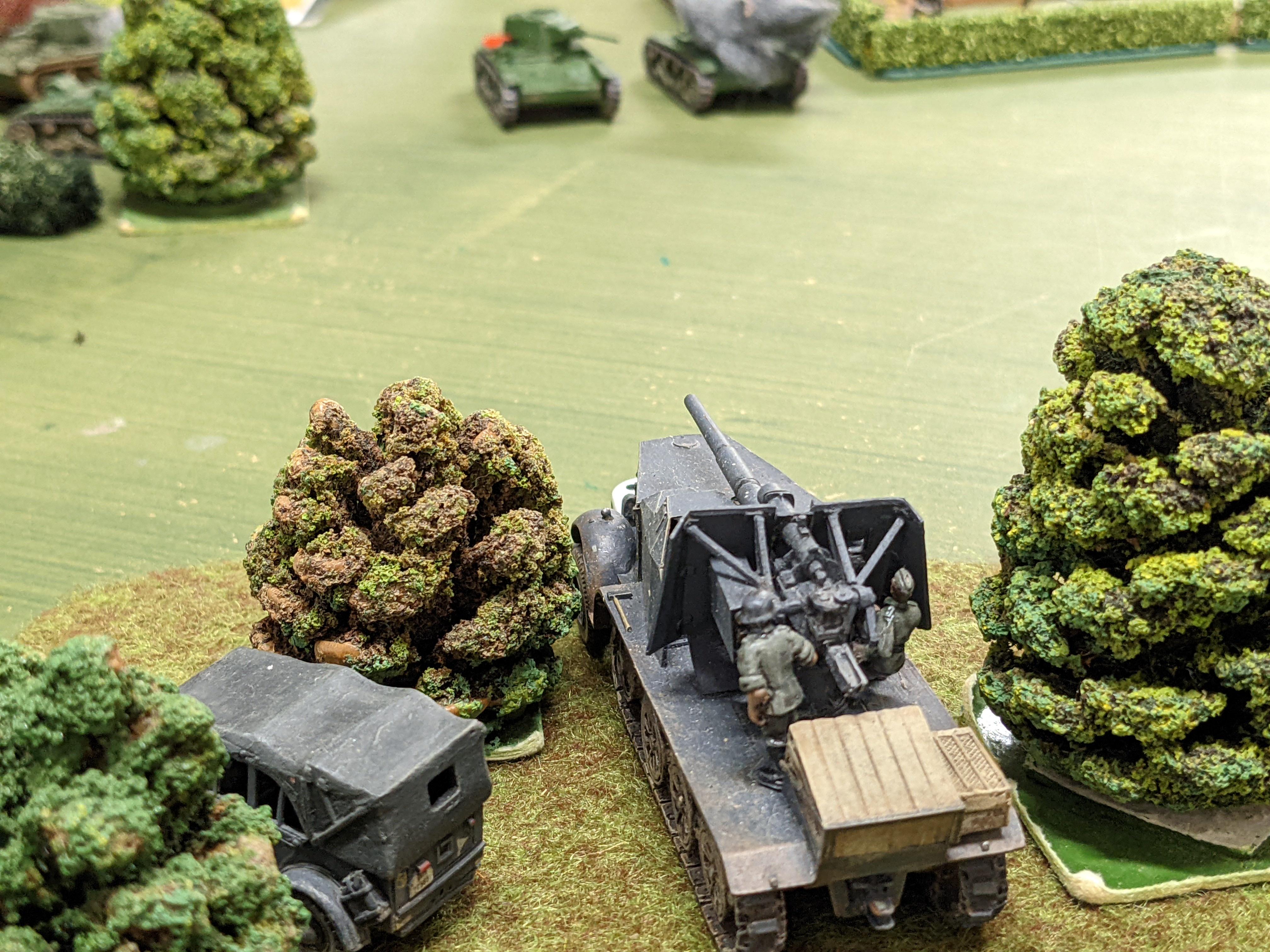 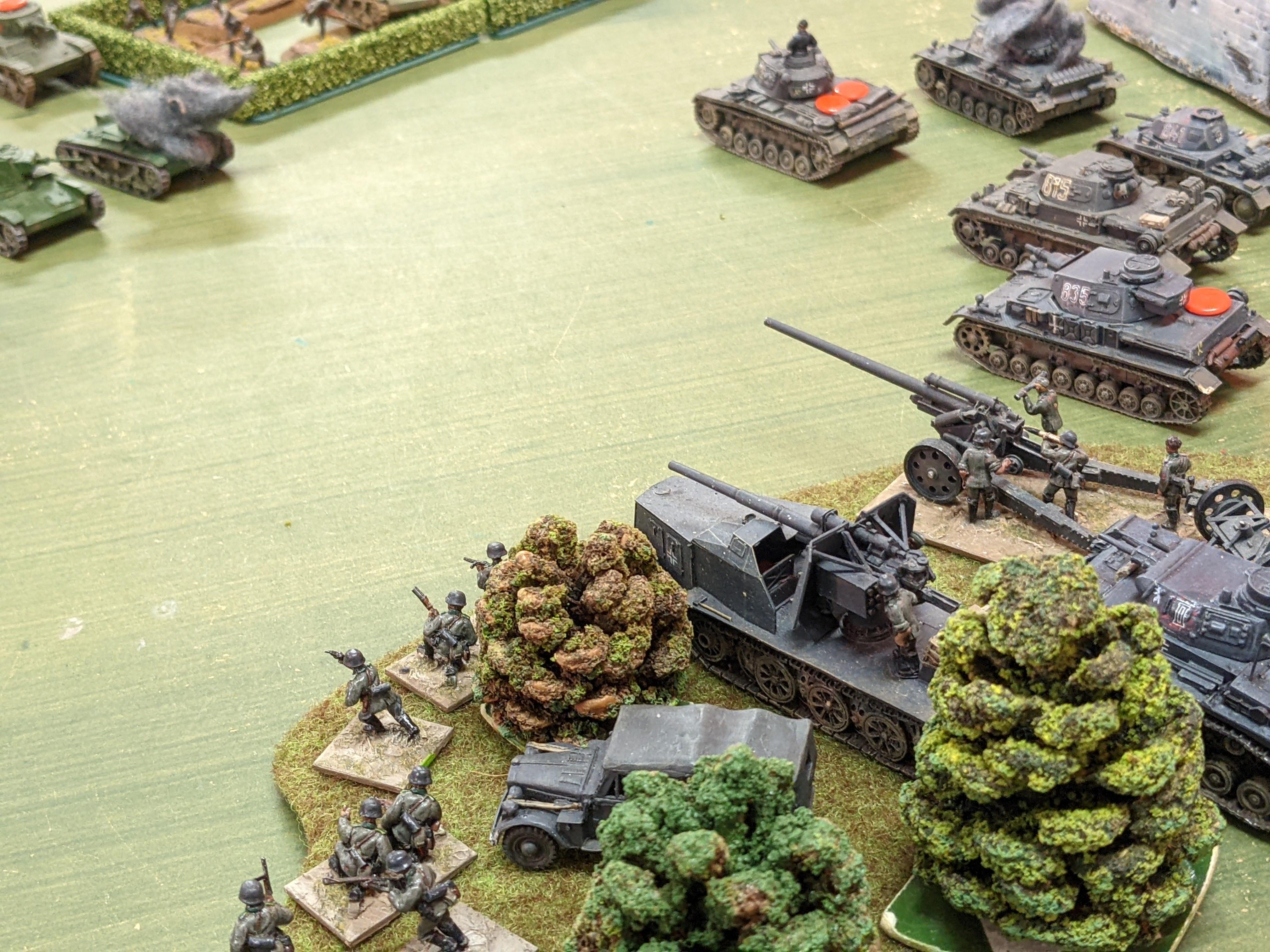 They are soon both in action against the Soviet armour. This just as well as the Germanarmour is taking significant damage. 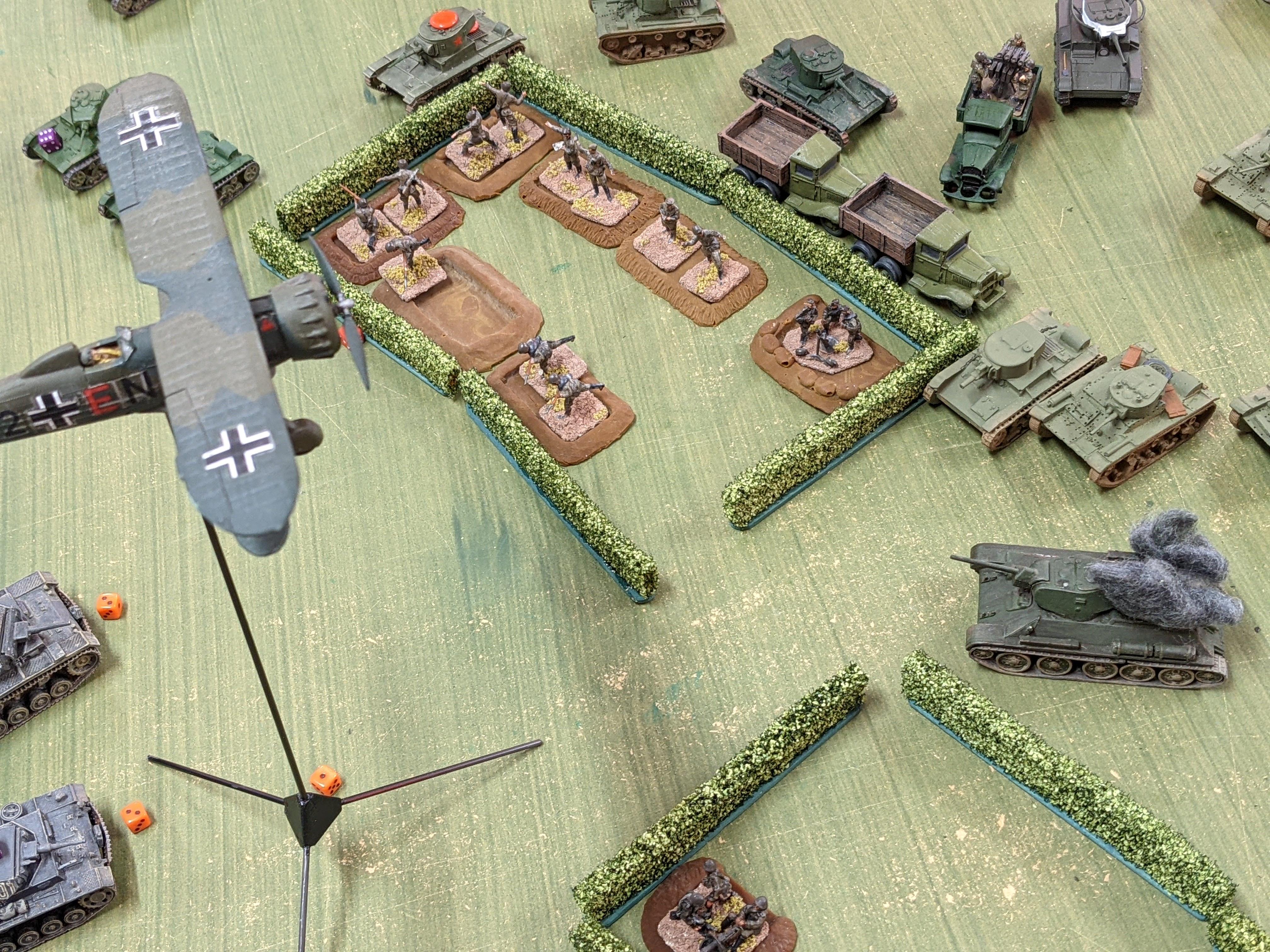 German air support also plays its part knocking out the Soviets only T34. 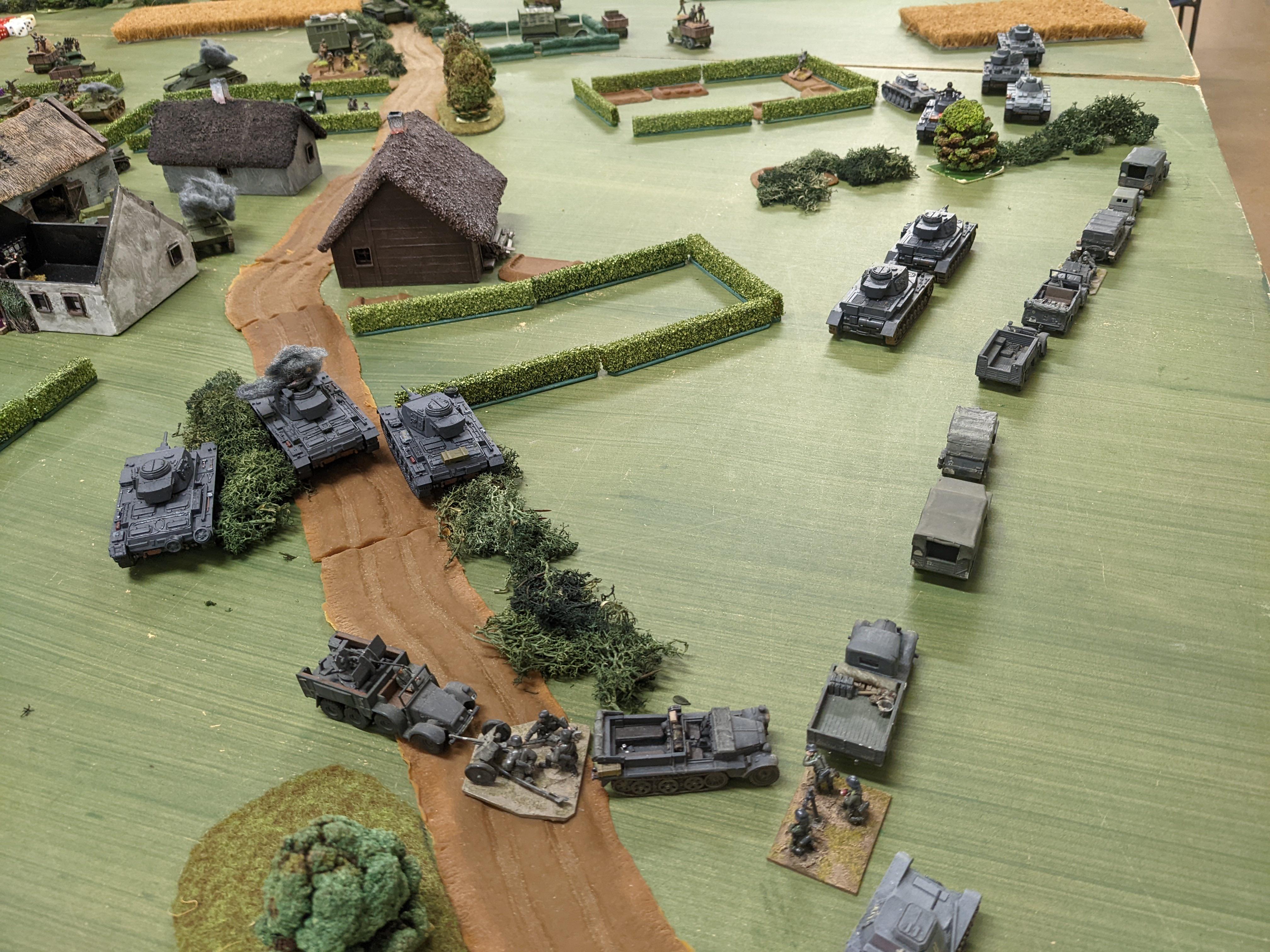 With the Soviet troops in Molodava having lost their support weapons, transport and needing a morale test Panzer battalion II/15 and Schutzen Battalion II/110 leave the trapped Soviets covered by a tank company, to be mopped up later by the infantry units following on. 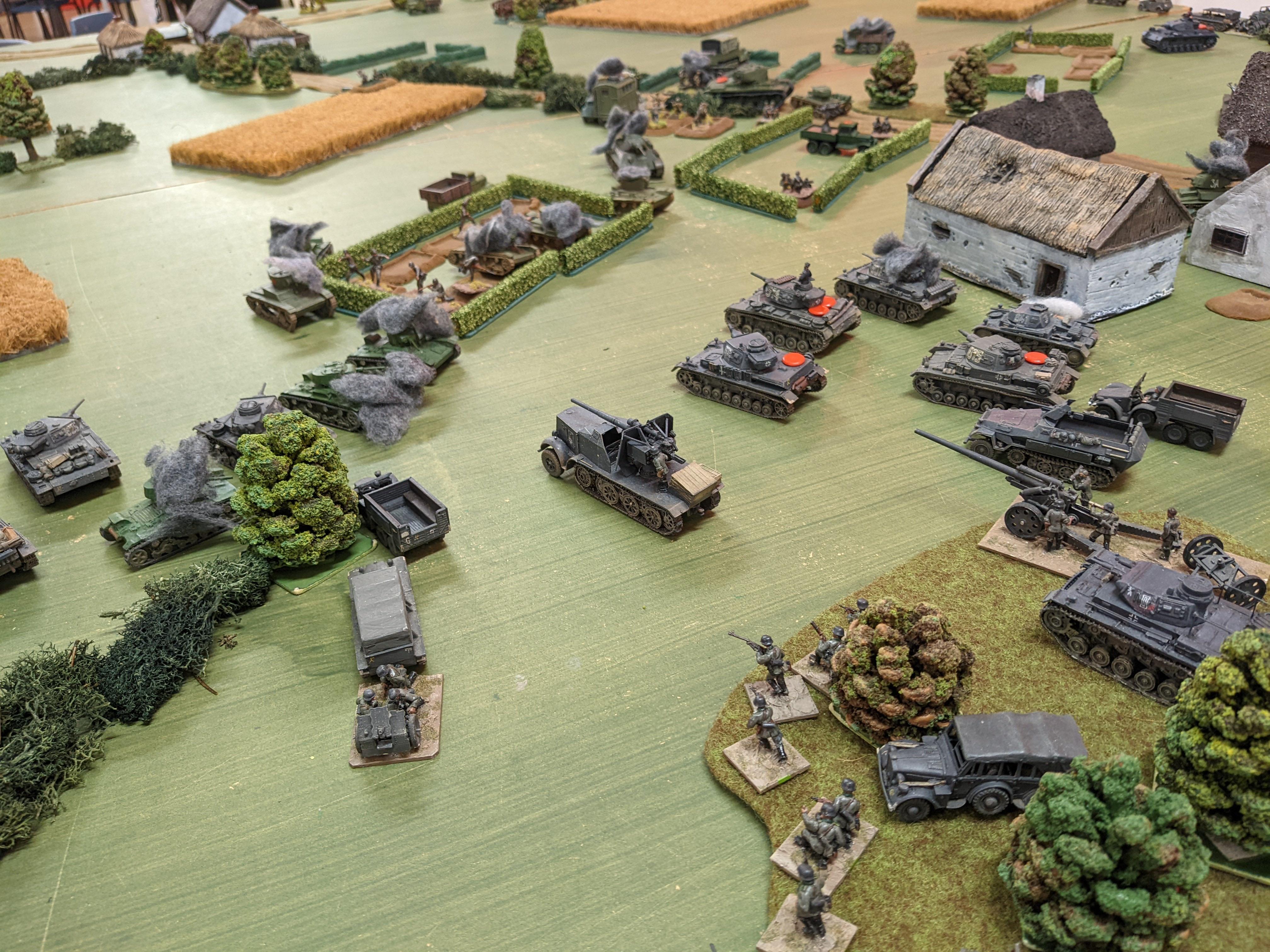 Similarly on the other side of Molodava I/15 and I/110 advance towards a long line of knocked out Soviet armour. 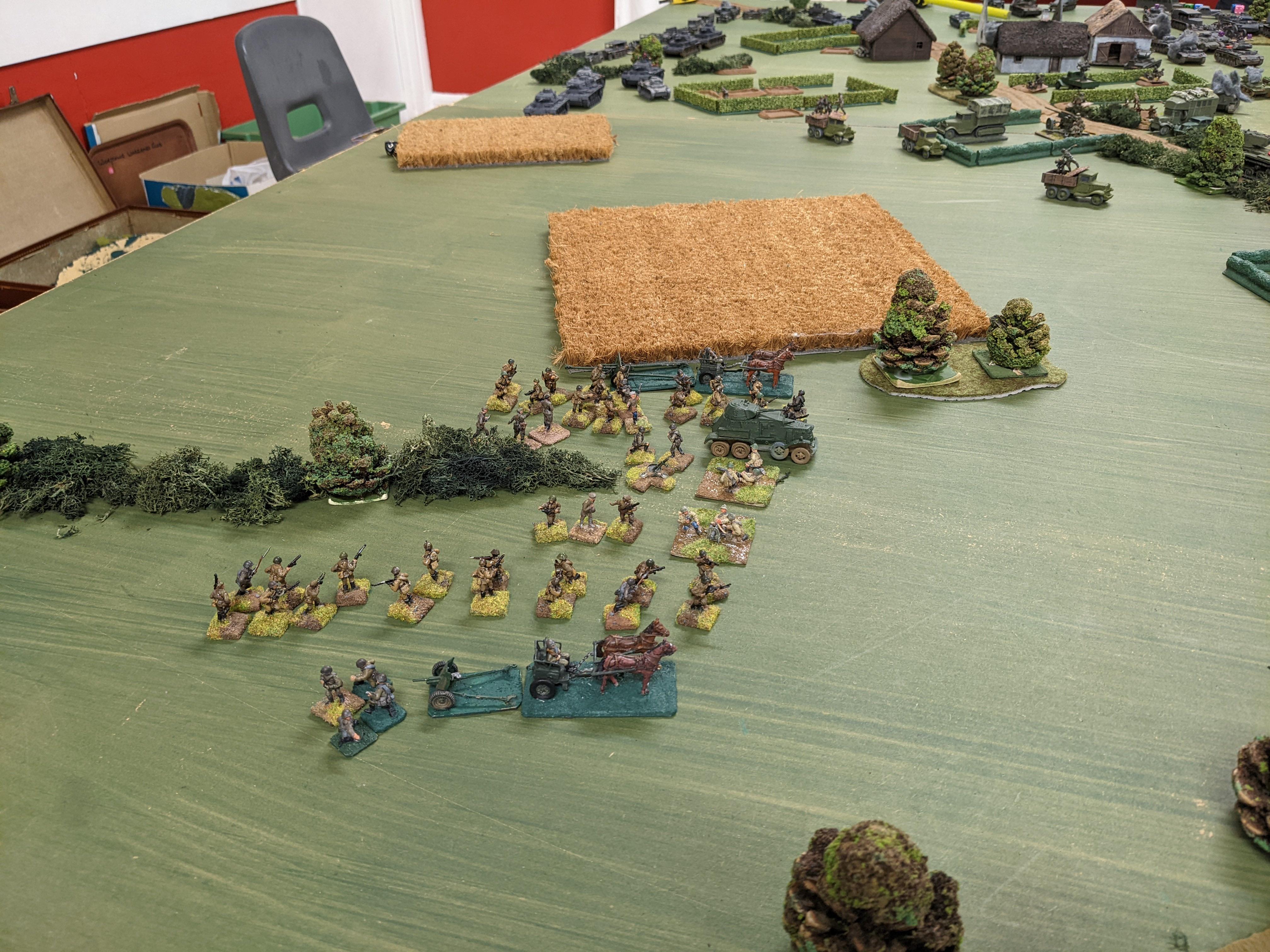 A vehicle from 43rd TD HQ has made physical contact with the 228th RD troops and Tsibin has taken them under command. 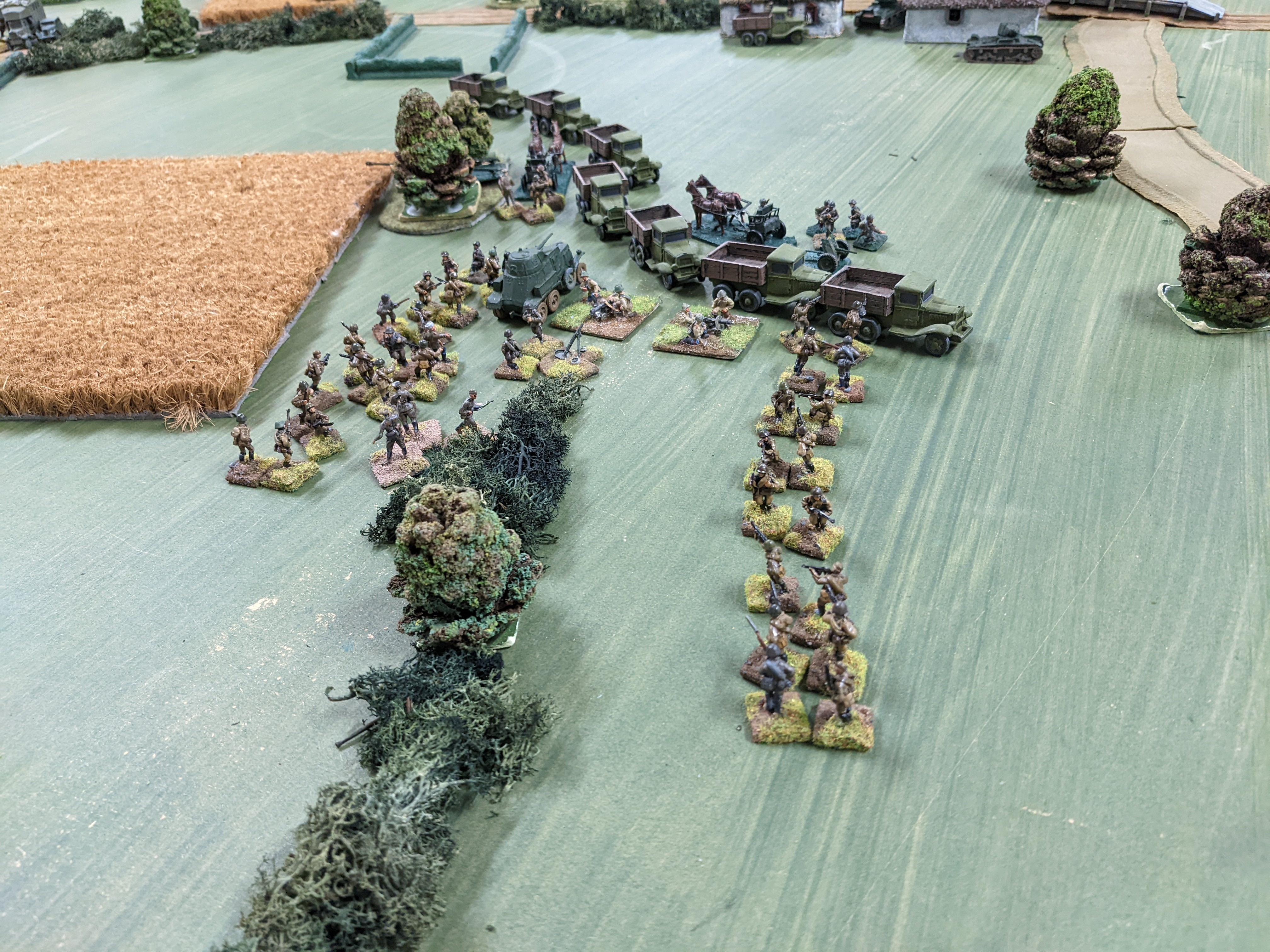 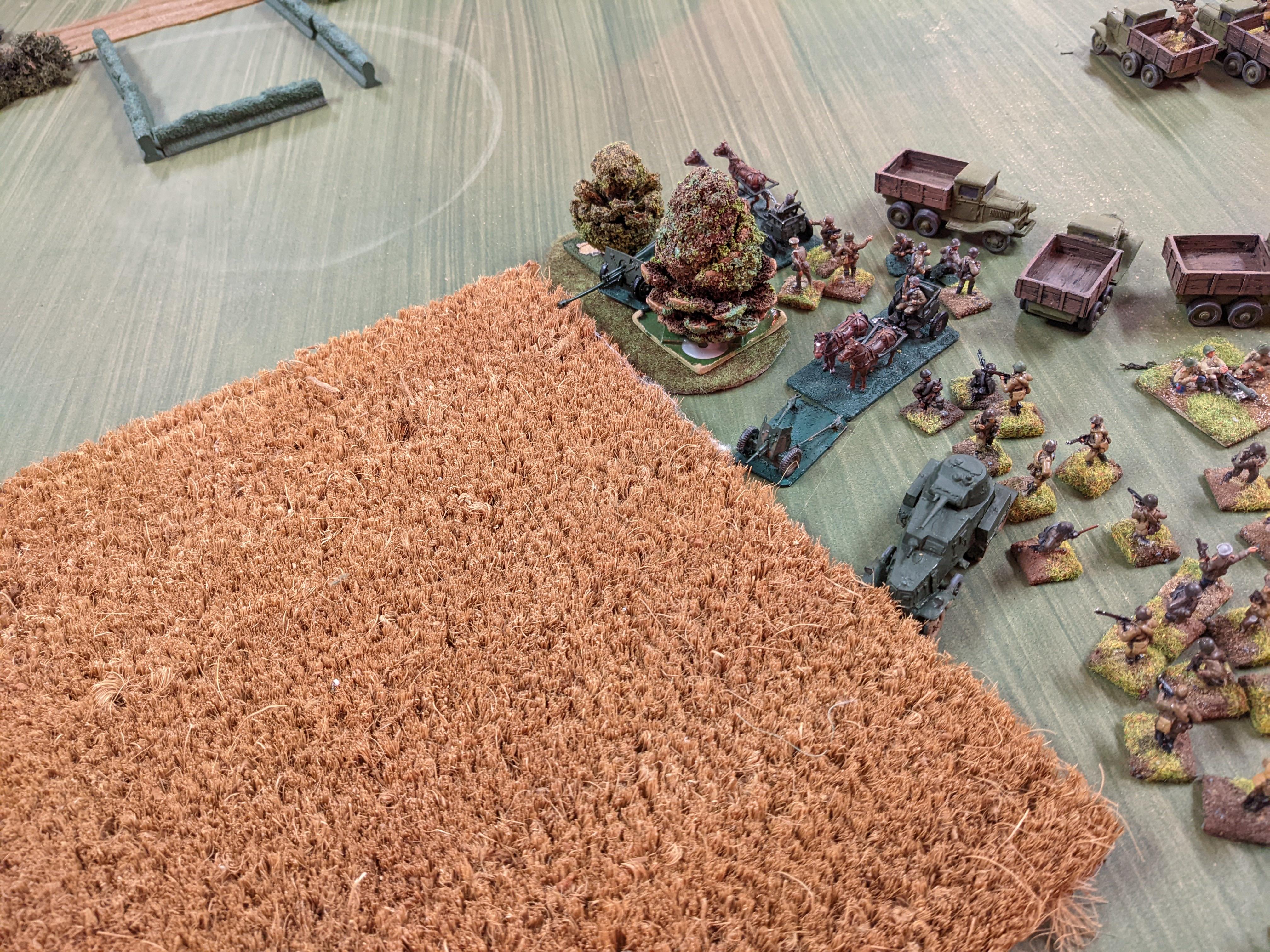 Tsibin orders that half the troops be moved rapidly, using his rifle regiment's empty trucks, to Varkovychi to guard the river crossing. The other battalion with the guns is to form a gun line facing the advancing Germans. 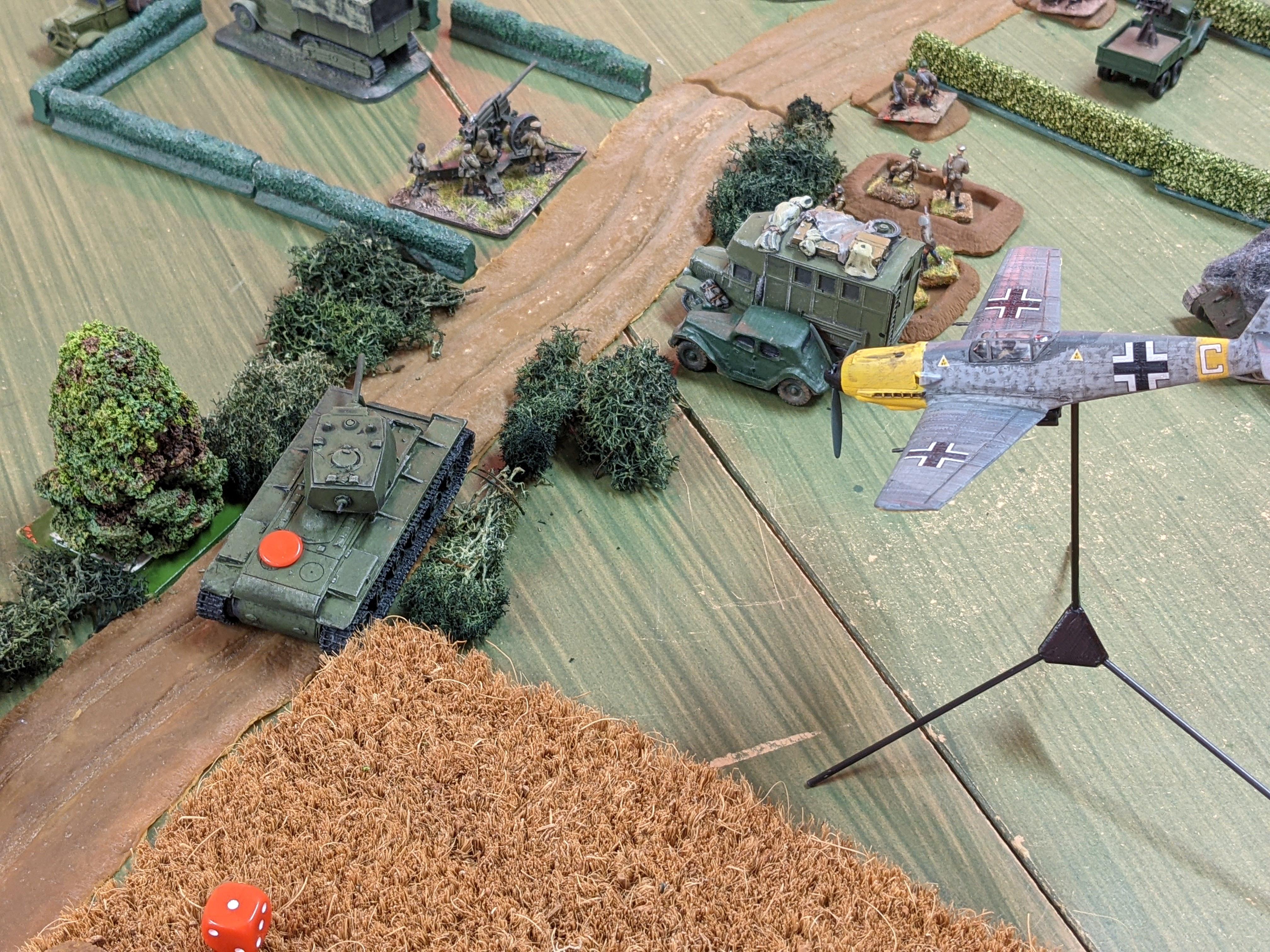 A second German air attack goes in but only manages a heavy damage on the KVI. 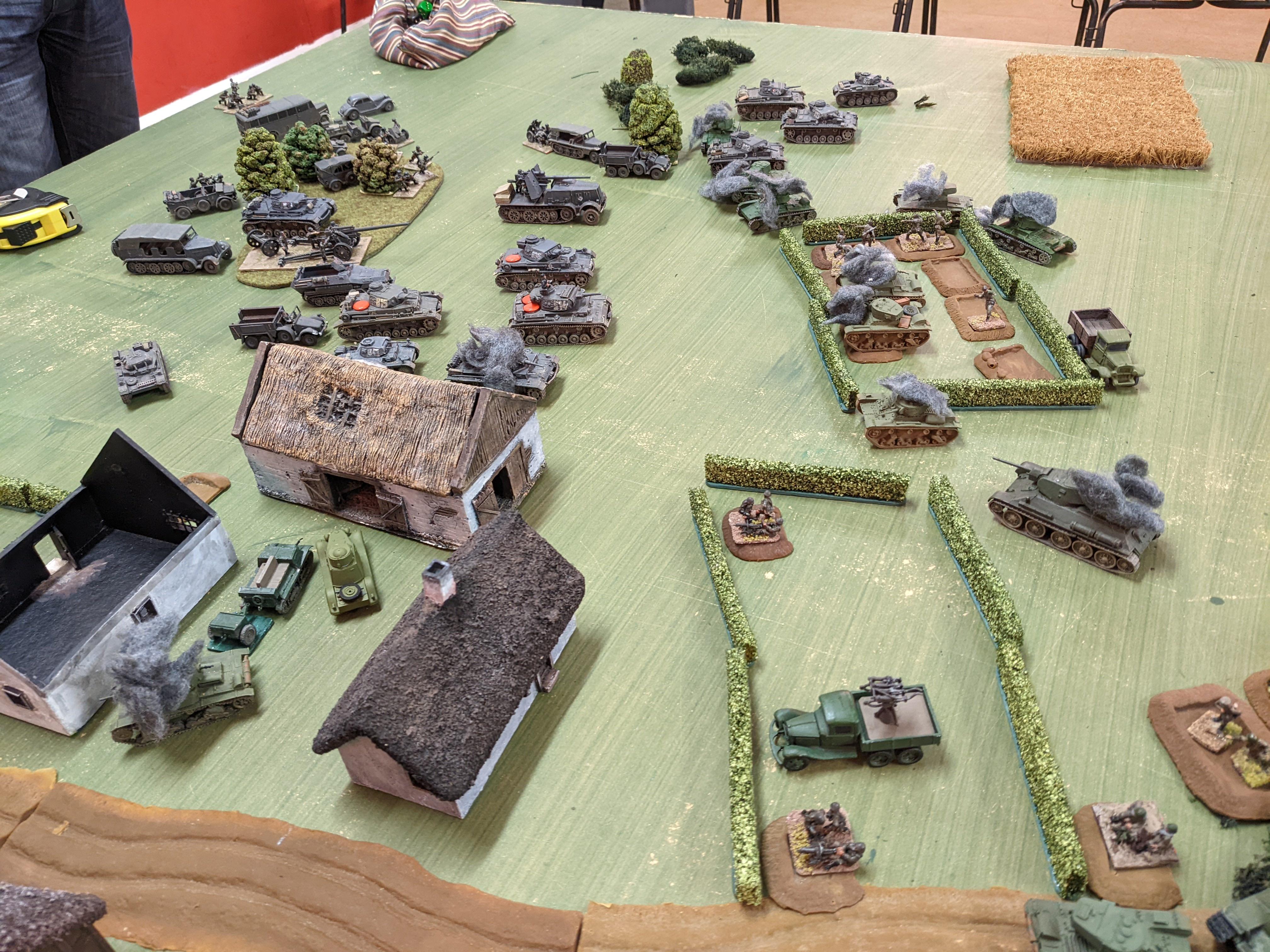 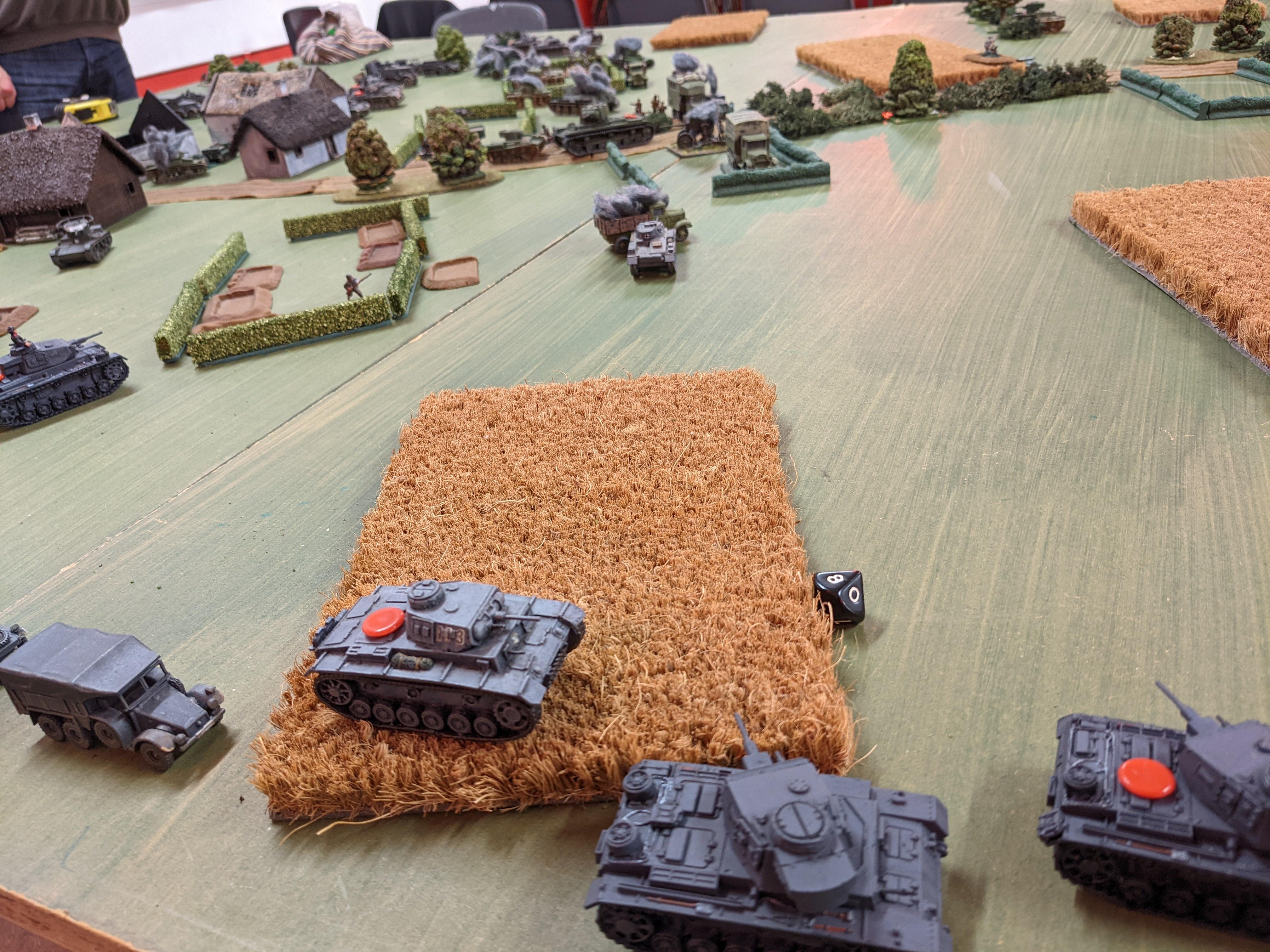 The German advance on both flanks continues, but the KV and the 76mm AA gun still represent a serious threat. 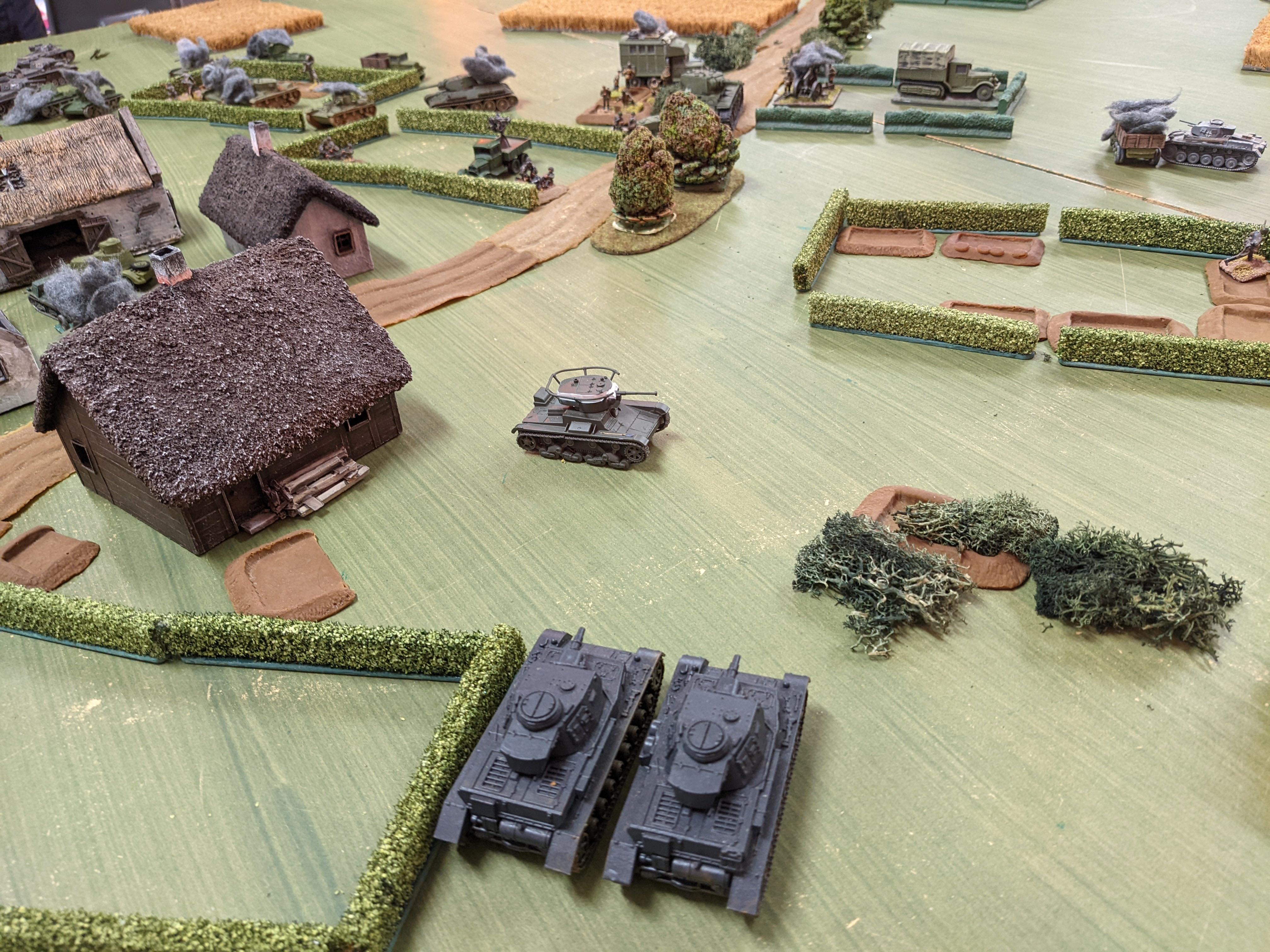 Fortunately for the Germans a good shot from a Panzer IV takes out the AA gun, while a Soviet tank unit commander makes a desperate attack towards enemy motorised troops only to find himself in a dual with Panzer IVs. 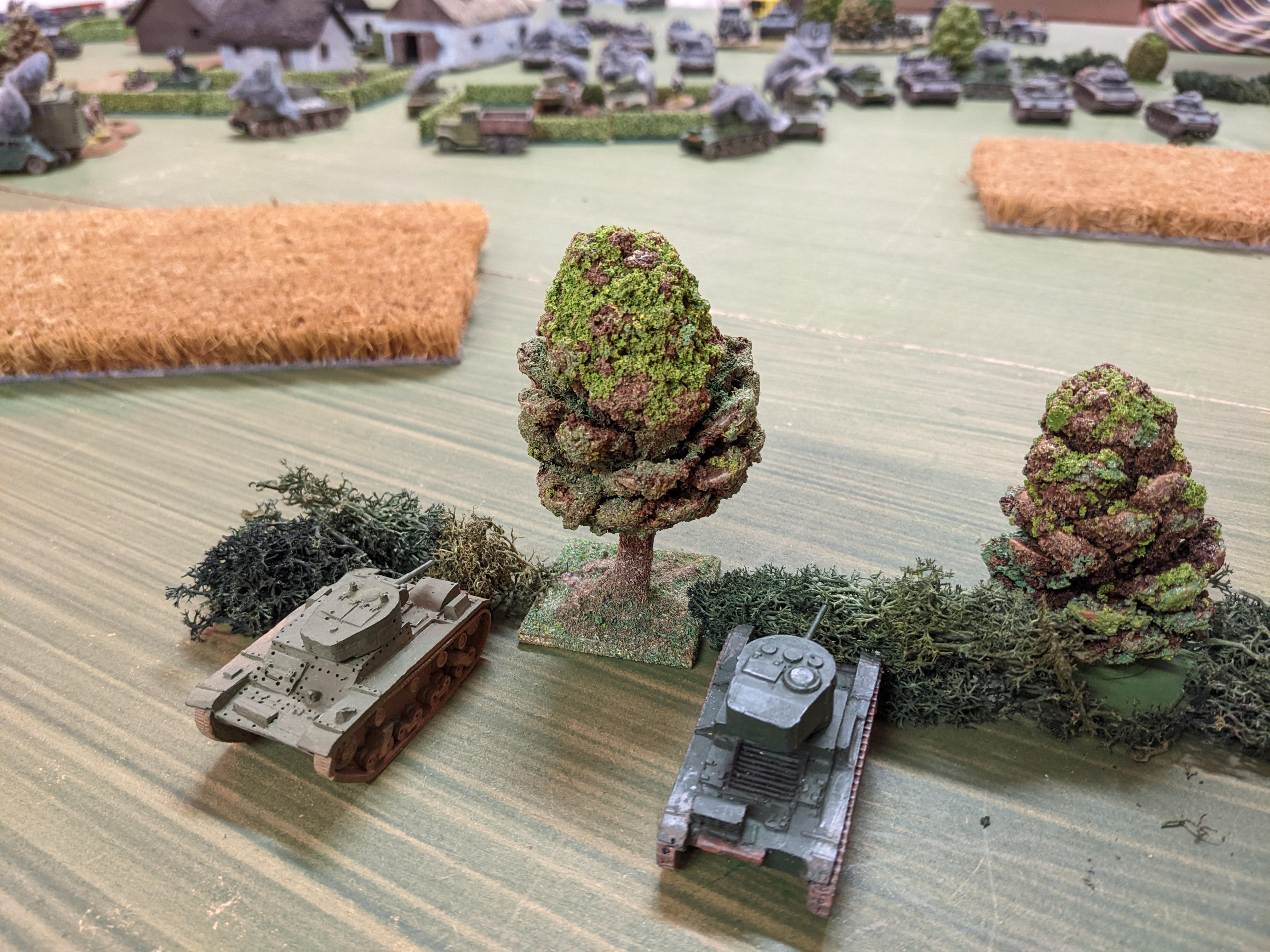 At the end of the game two tanks of the three vehicle battalion assigned to guard the bridge at Varkovychi await the advancing Germans alongside their newly arrived comrades from the 228th Rifle Division.

It proved to be another intense game with the advantage switching back and forth at various stages. The game ended with the Germans having the upper hand but still facing Soviet resistance. Knocking out the KV would be key, as would putting pressure on the 228th infantry defending Varkovychi. I used a reduced strength riflr regiment orbat to reflect earlier losses and gave the "militia" morale to reflect the fact that they had already taken a beating, were separated from their parent unit and also that they were likely to be tired and short of food and ammunition. The Soviet tank division I rated "regular" and the Germans elite.
All the Soviets are mine bar the 76mm Air Defence gun Mod.38, which was Dave's (SHQ FBG101, they also do the earlier Mod.31 FBG89).
Dave provided all the German infantry, guns and one tank battalion . I provided the other.
Conveniently the orbat for the 43rd Tank Division is set out in the Rapid Fire Russian Tank Units 1941-42 pdf available on the RF website.
Various sources suggest that a the start of the battle 11th Panzer had 24 x 37mm Panzr IIIs, 48 x short 50mm Panzer IIIs and 20 Panzer IVs and that was what I based the orbat on.The only other thing worth mentioning is that the Soviet air support was set up to be harder to acquire as the game went to reflect the fact that it was an ever decreasing resource owing to German air superiority.
Top

What rules RF? as I saw a couple of D10 kicking around!
Top

What rules RF? as I saw a couple of D10 kicking around!

Phil, yes RF2 D10s for anti aircraft fire, and of course close assaults had we come to that. Unusually it did not.

Looks a good fun game, and of suitable size to portrait such a momentous battle. Some interesting models mixed in there, the 10cm gun is a beautiful piece.
Top
Post Reply
5 posts • Page 1 of 1