I had to do a short notice stand in game at our club last Monday. I went for a late 1941 Eastern Front game inspired by the fighting for Tikhvin in November/December that year. Tikhvin is east of Leningrad and capturing it was part of German efforts to isolate Leningrad from the rest of the Soviet Union.
Despite being already overextended the Germans had initial success because of the issues that were affecting the Soviets at this time. The latter managed to find reinforcements and then began attacking the flanks of the salient that the Germans had created as well as Tikhvin itself. In the end the Germans were ejected from Tikhvin permanently. At one stage the Soviets managed to cut the German supply route and this was the inspiration for this game.
This the table layout looking northwest, the lateral road is the German supply route and Tikhvin is off table to the right. The Soviets have broken through and are advancing up the road in the foreground with the objective of seizing the small town and using it as a blocking position. The Germans have responded by moving in a battalion of Gebirgsjaeger supported by an "88" and with a Panzer 'fire brigade' on the way. 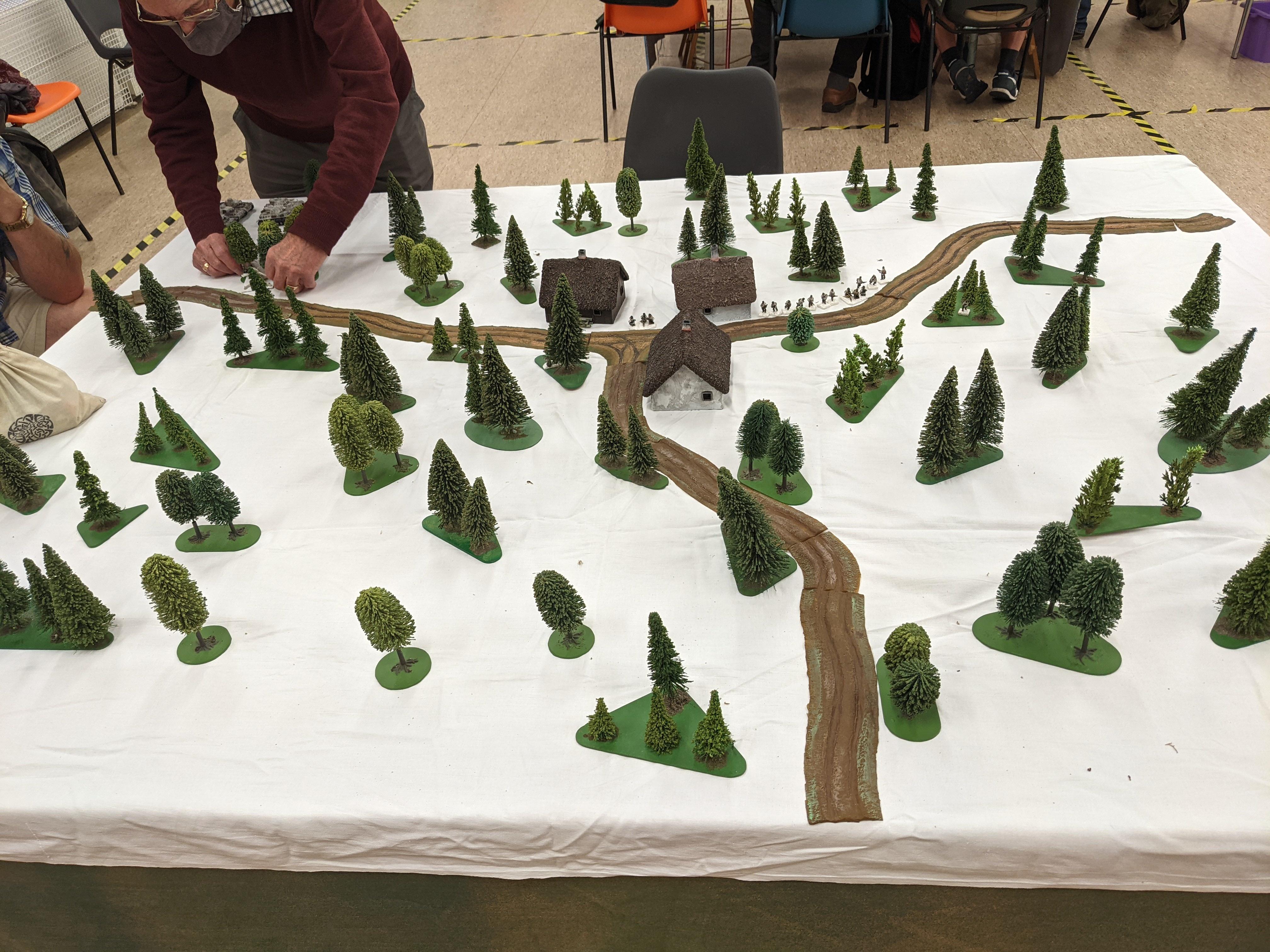 There were four of us on the table, two of whom invariably prefer to play German, so DaveC was OC the Soviets and I was his subordinate commander. We play the snow movement options in the RF Eastern Front scenario book as dicing for movement cross country adds uncertainty reflecting the possibility of hidden obstacles and varying snow depth. Even so Dave opted not to move everything up the road since although faster it would end up committing his forces piecemeal. I was therefore sent to attack on our left with an infantry battalion supported by a tank battalion (one KV1), while Dave moved another infantry battalion up the road to pin the defenders and supported by another tank battalion (one T26 and two T60s) 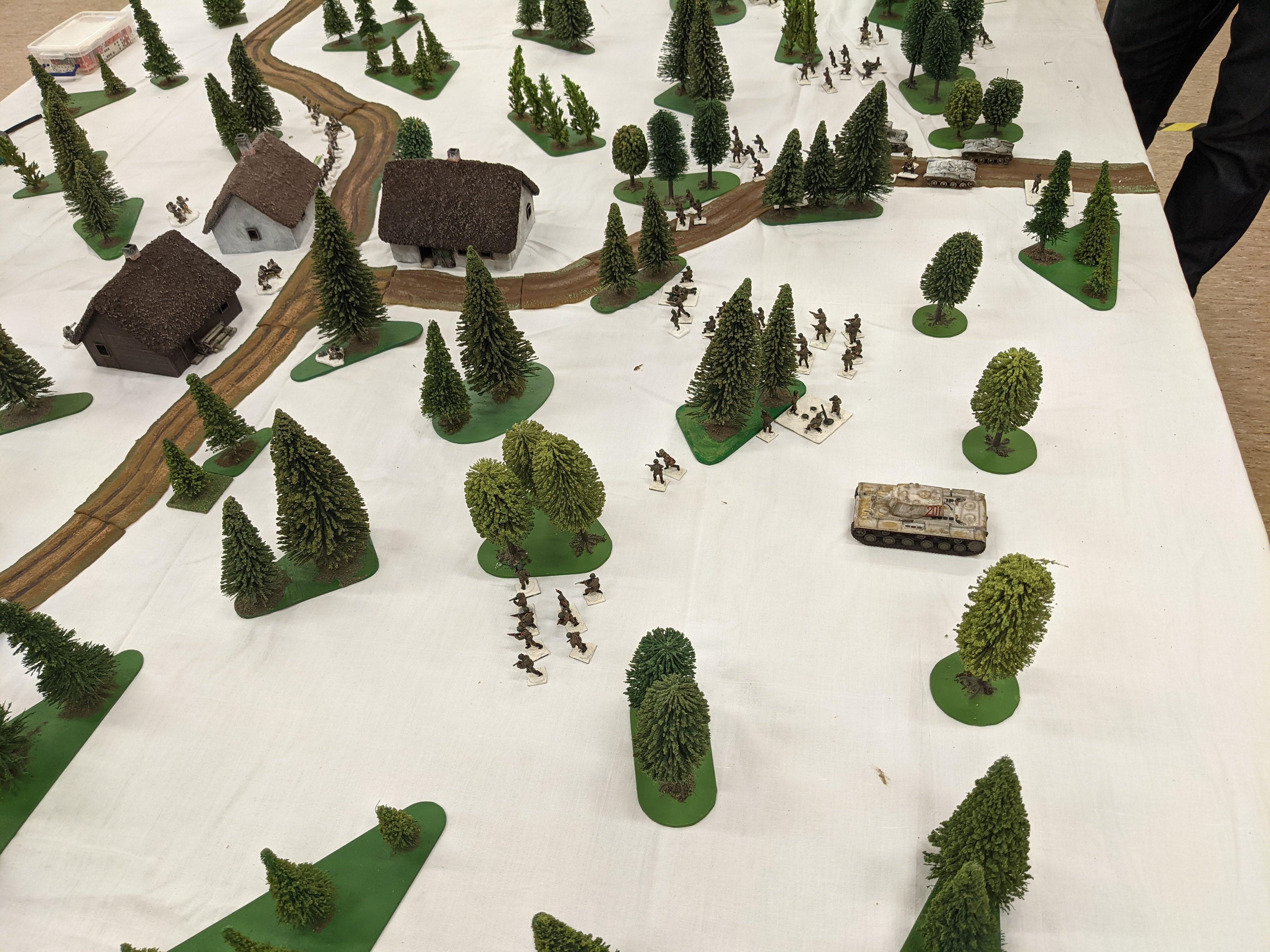 As this is happening a company of Panzer IIIs (short 50mm) arrive on the German right flank to support the Gebirgsjaeger. The "88"can be seen lurking in a position that proved propitious for the Germans. 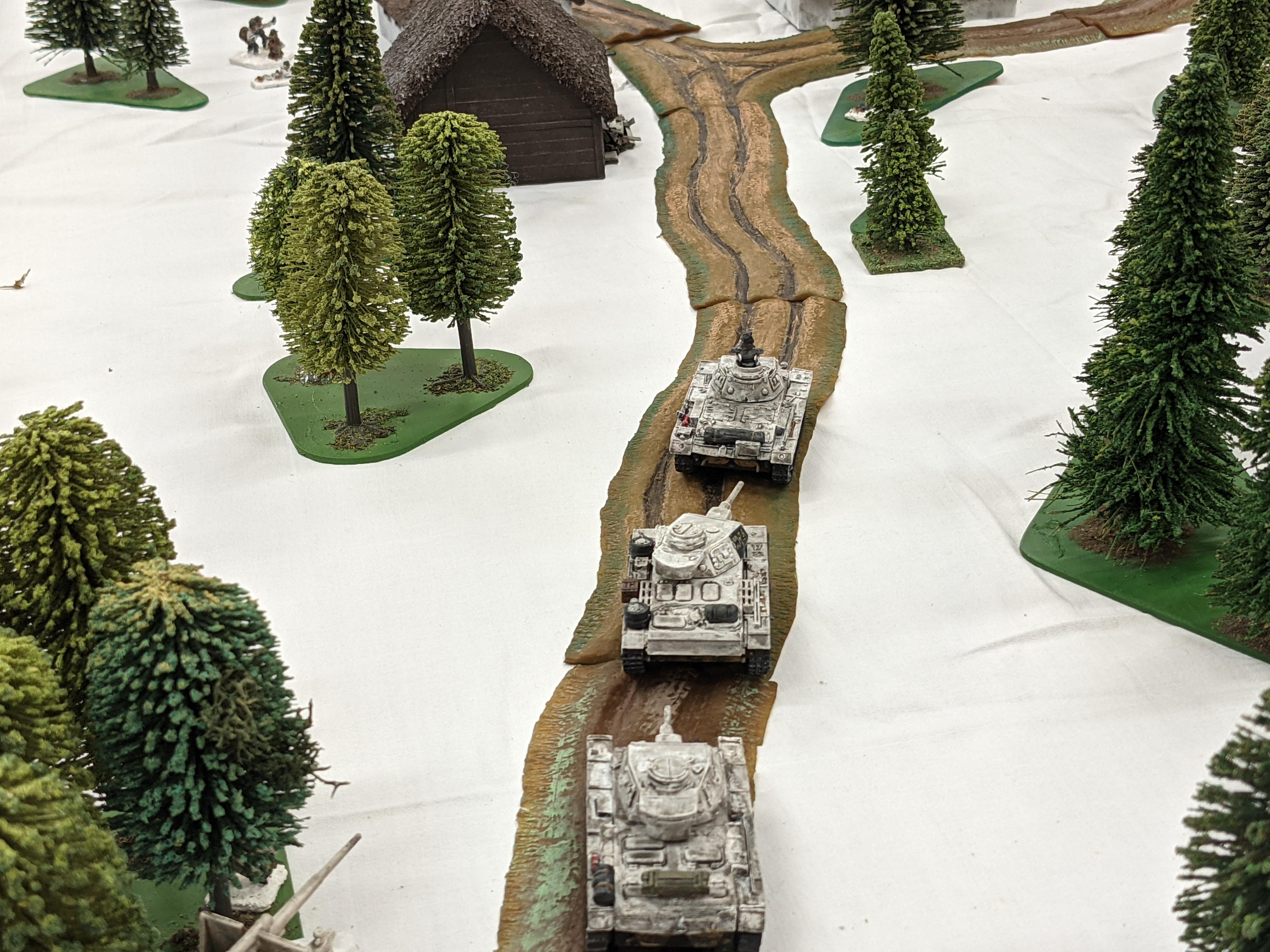 The Panzer IIIs moved up to the village and engaged the attacking Soviet infantry. This in turn exposed them to the fire of the KVI which disabled one while the subsequent morale test caused it to be abandoned and the rest of the company to retire two moves. 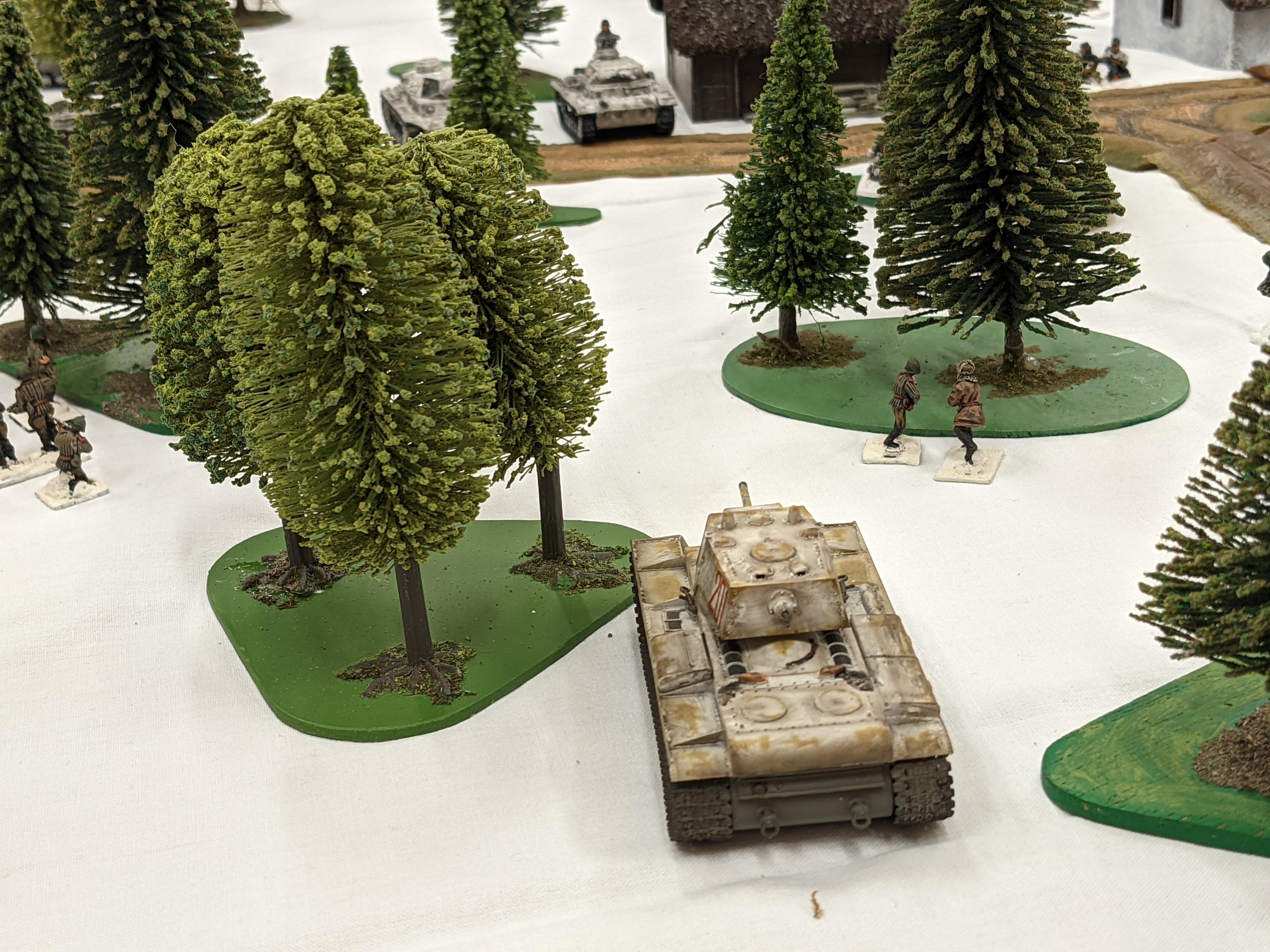 Meanwhile in the centre heavy Soviet fire had reduced one building to hard cover and caused heavy casualties (it was not a one way traffic, by the end of the game my infantry battalion had lost 16 casualties). On the Soviet right Dave had used the speed of the third tank battalion (two T34s 3xD6 over snow) together with the company of tank riders (the only infantry available to the brigade) to conduct a flank attack on the German left in support of his attacking infantry. The Germans assisted him by extending their position with a company of infantry in snow scrapes along the road to Tikhvin. This was probably in anticipation of tank support which did not materialise owing to mediocre movement dice. The German mortar was pretty effective until the observer was overrun) 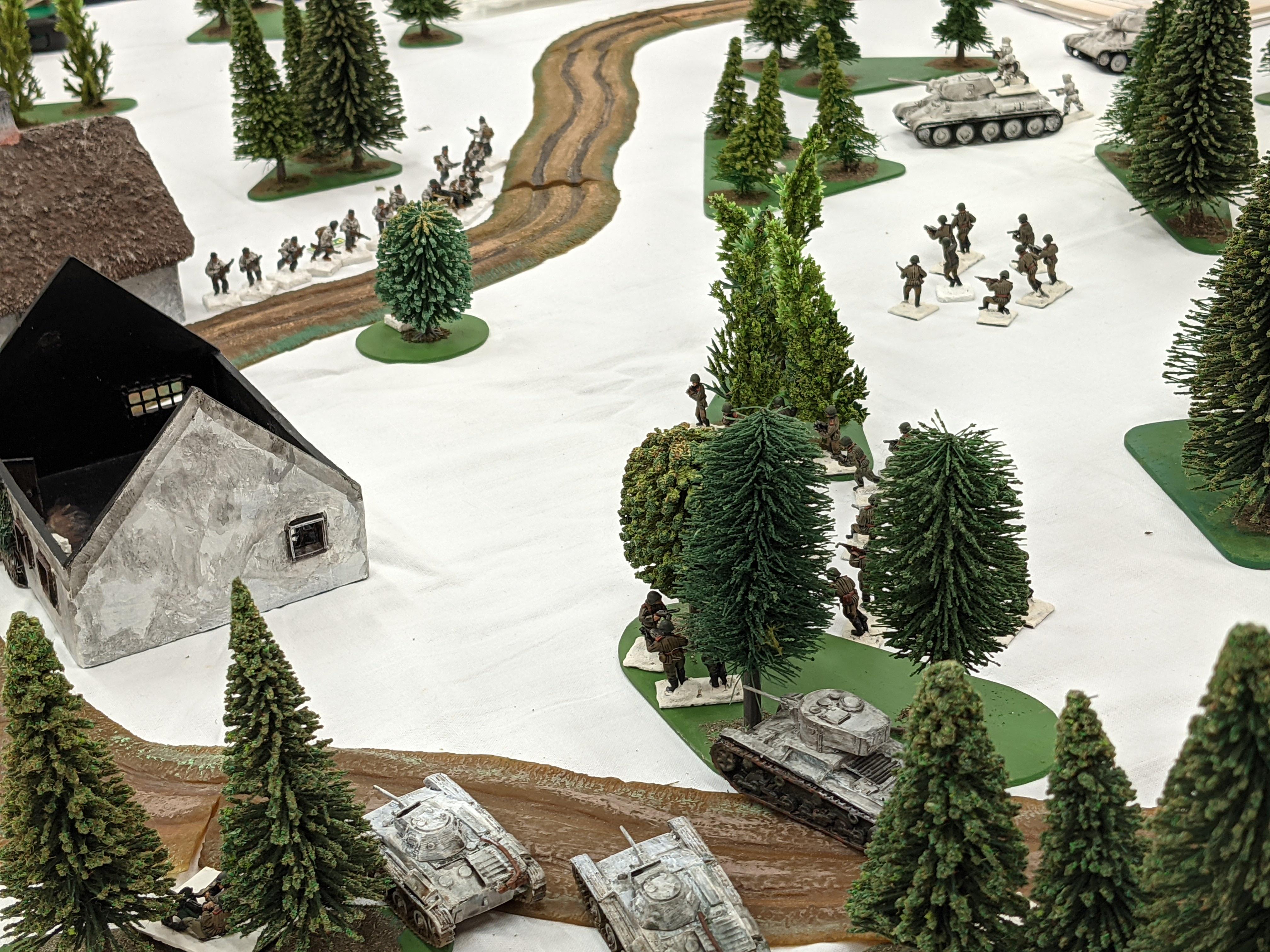 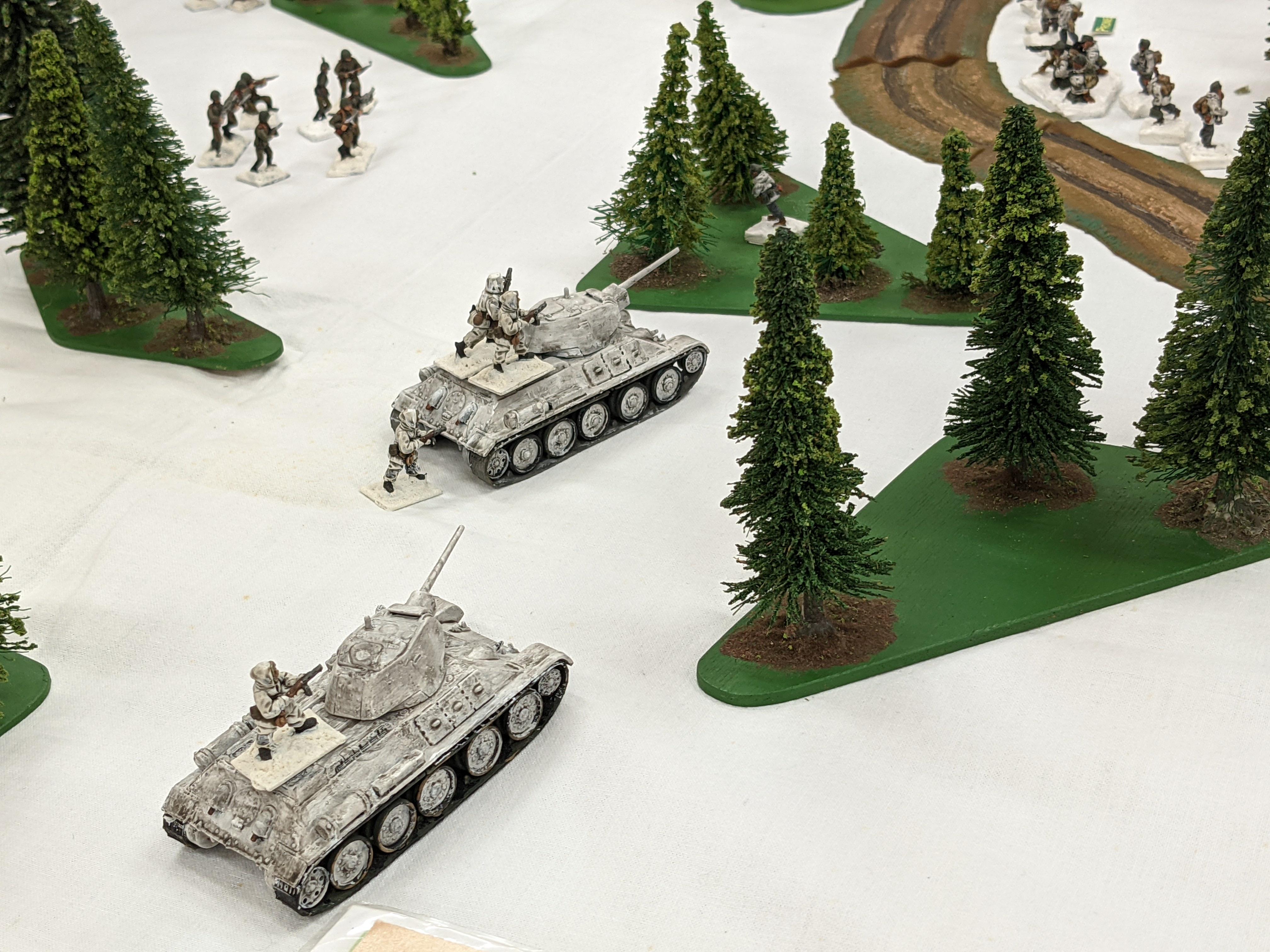 On the Soviet left my KVI advanced and attempted unsuccessfully to engage a Panzer IV, only to be taken under fire by the "88". A short duel followed, won by the "88"

. This freed the reactivated Panzer III to advance and engage a T60 (which survived) 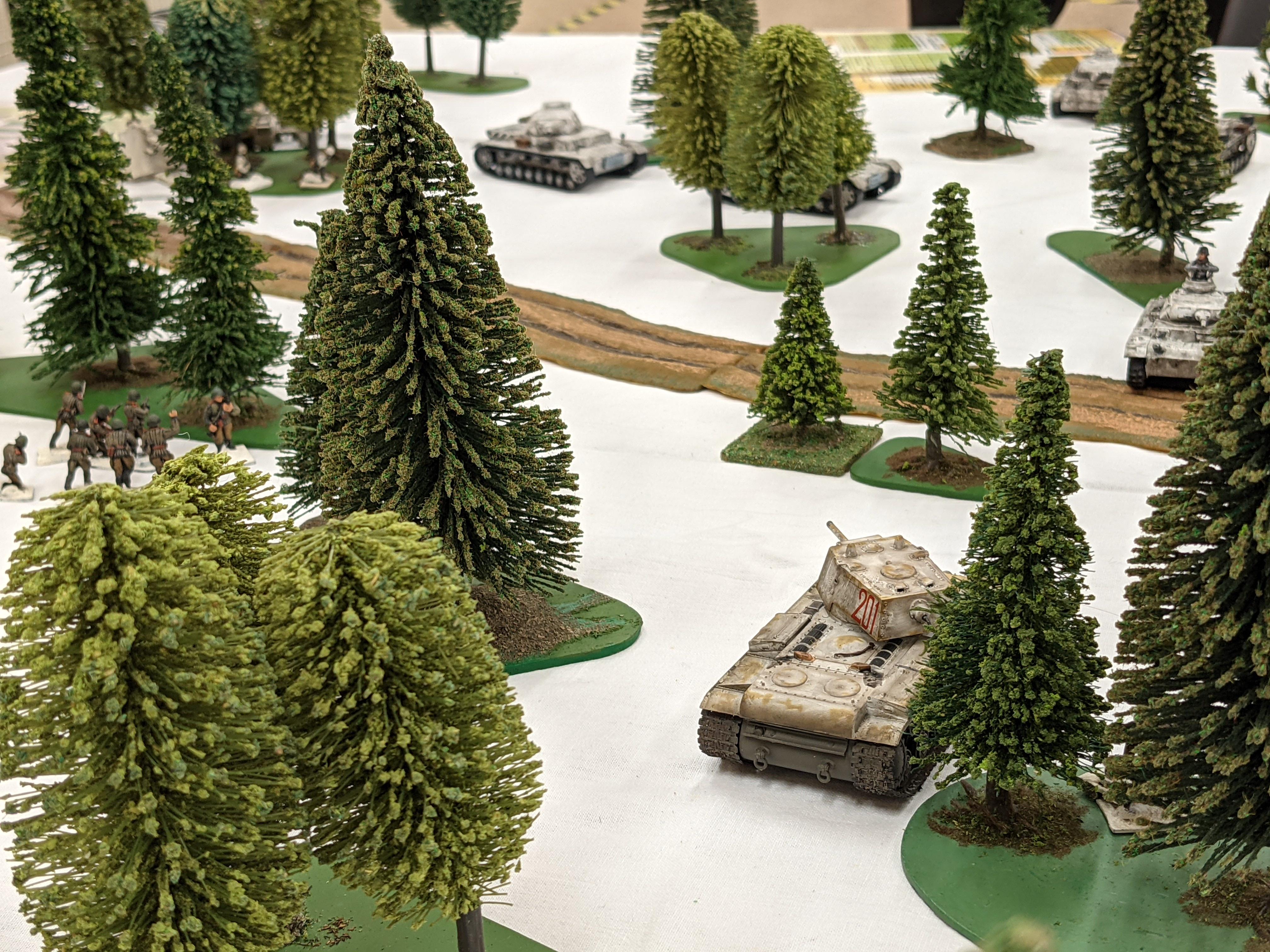 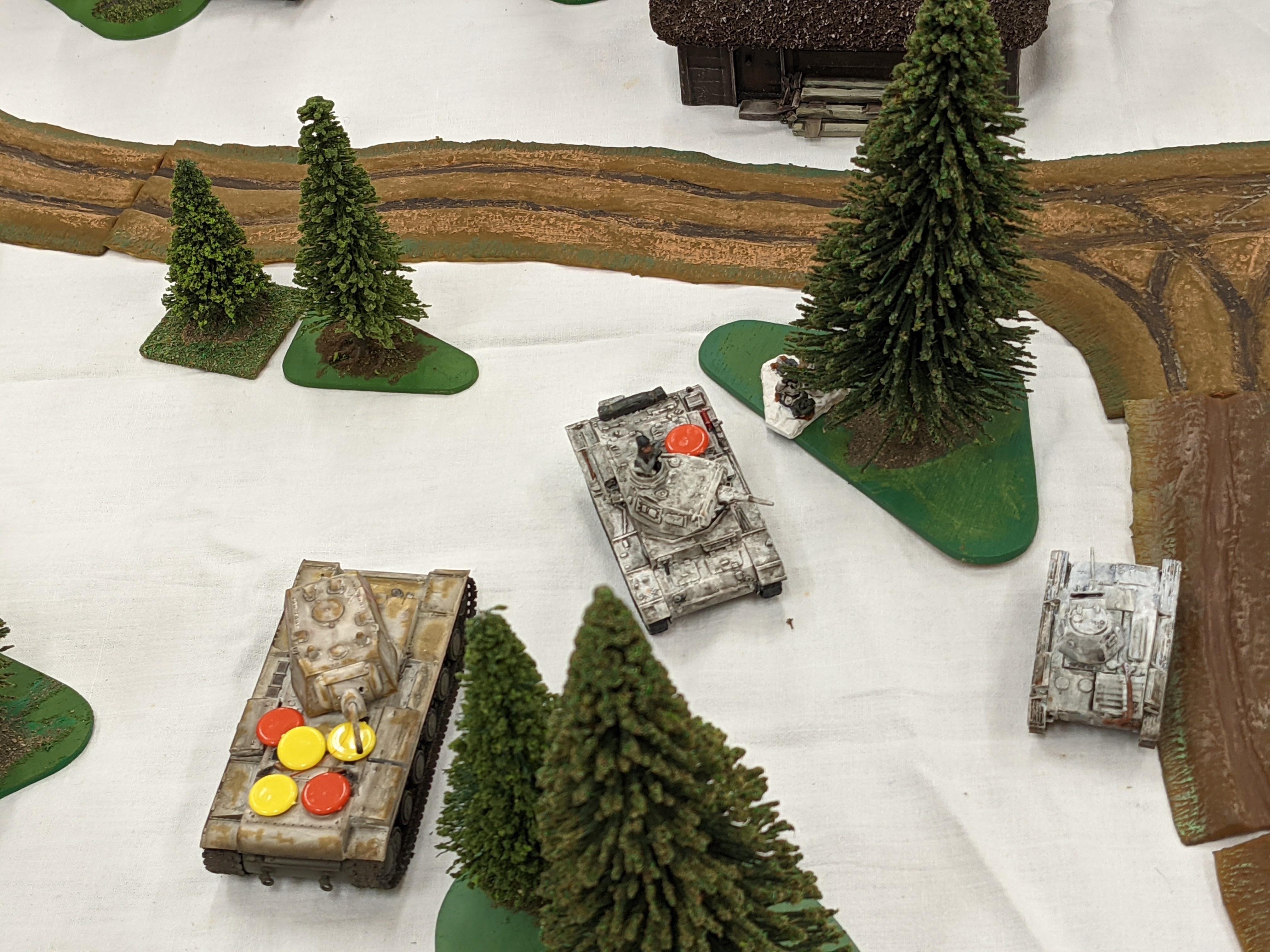 Time was running out for the Germans as when the Panzer IV company finally arrived on the German left they were immediately engaged by the T34s and had one vehicle disabled. More importantly after successive tests the Gebirgsjaeger finally failed their morale despite being elite and the majority in hard cover. 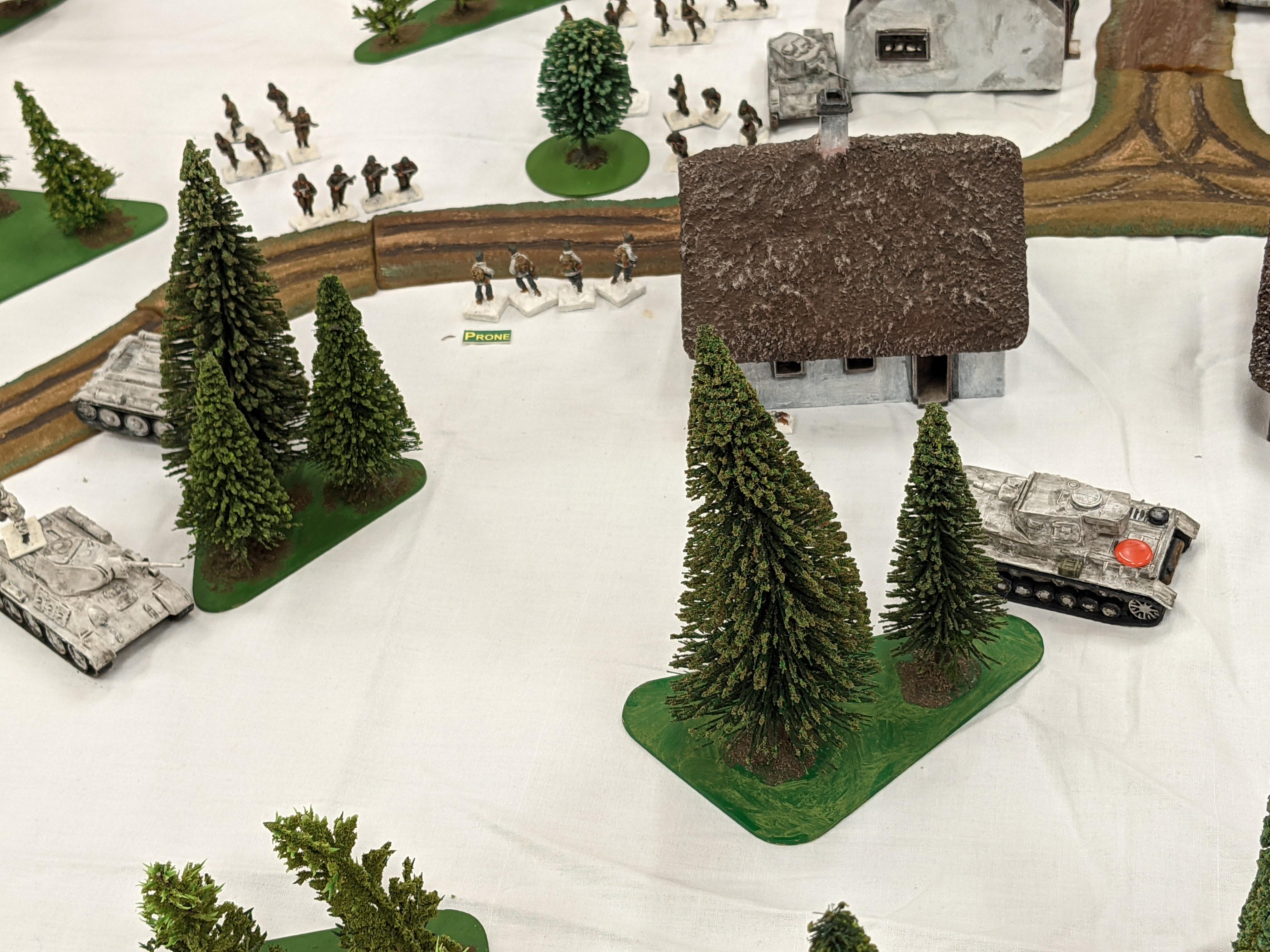 Had the Germans had better luck with their tanks both on movement and morale the outcome might have been different.
Top

This was a very fast moving game played with great spirit.

The heroic KV1 crew could have traded. Shots with the PzIII for much of the evening but for the intervention of the 88 but that's what it was there for. It did attract sufficient attention to allow the attack on the village to make contact. With limited supports and less than ideal visibility soviet tactics were simple and direct providing more targets than the defenders had the assets to counter.

Thanks to Robert for a cracking game.

Finally its always worth remembering that if your Aunt was differently equipped she'd be your uncle.
Top